LOOK BACK: The 1991 flash flood that devastated Ormoc City 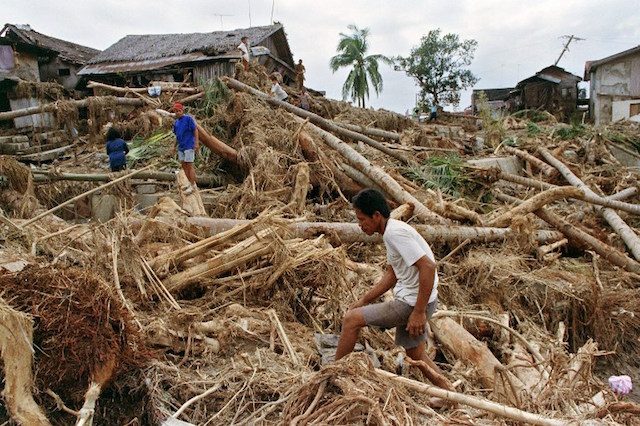 Facebook Twitter Copy URL
Copied
Before the onslaught of Super Typhoon Yolanda in 2013, Ormoc City faced a powerful storm that submerged parts of the city on November 5, 1991

MANILA, Philippines – In 2013, Super Typhoon Yolanda (international name Haiyan) – one of the strongest typhoons to hit the country – left a trail of devastation along Eastern Visayas, killing more than 6,000 people.

In Ormoc City, power and communications lines were cut off and roads were left impassable, leaving the city isolated.

But more than two decades ago, residents of Ormoc had faced a similar tragedy, when hundreds of people were killed in a matter of hours due to flash floods that submerged the city.

On the morning of November 5, 1991, Typhoon Uring (international name Thelma) bore down on Leyte, wreaking havoc and burying the eastern and western plains of the province in water, sediment, and debris. (READ: FAST FACTS: Leyte and natural disasters)

Rivers along the coastral stretched overflowed. When the waters receded, it left behind sediment, 2 feet deep.

According to the report, intense rainfall caused the massive flooding in Ormoc and parts of Eastern and Western Leyte. But it was not clear why the typhoon unloaded such heavy rains when it crossed Leyte.

Aside from the heavy rainfall, the Manila Observatory’s report identified other factors that contributed to the massive devastation.

While illegal logging and deforestation were to blame for the landslides, geographic conditions in the area also had to be considered. The soil in the Ormoc watershed exceeded its capacity to hold water, while the central part of the island of Leyte, classified as volcanic terrain, has soil that is susceptible to erosion.

The flooding was also exacerbated by debris from poorly-made infrastructure. One of the worst hit areas, Isla Verde, recorded a high death toll because the high-risk area was allowed to be heavily populated.

To prevent a disaster of this scale from happening again, the city government has taken measures to improve its disaster and resilience capabilities.

The municipal local government units began reforestation projects after the 1991 tragedy. The Japan International Cooperation Agency, meanwhile, conducted various studies and projects for flood mitigation. This includes the construction of bridges and slit dams for landslide reduction, and improving the drainage of rivers in the city.

These projects helped cut the number of casualties recorded during the onslaught of Yolanda in 2013. – Rappler.com