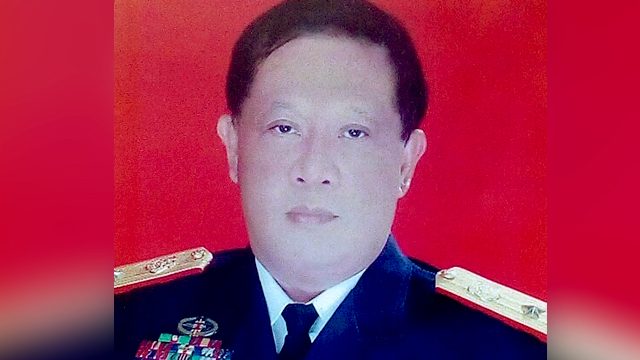 Facebook Twitter Copy URL
Copied
A bullheaded strategist and psywar expert, he was an intelligence officer through and through

Veteran intelligence officer and retired police general Rodolfo “Boogie” Mendoza died on March 28, 2018 of a heart attack. We are republishing his profile, published in Newsbreak magazine 17 years ago – on August 29, 2001 – when he was a 48-year-old police colonel. It was the first interview for a profile that the shadowy Mendoza granted to a reporter.

MANILA, Philippines – Nearly 4 decades ago, a scrawny Grade 6 pupil agitated 20 of his classmates to go on strike in a public school in a remote town in Pangasinan. His complaint: why should they be ordered to cut wild grass in school when there were janitors around?

So one day he and his young recruits decided not to cut grass. The school principal threatened to punish them, but their parents pleaded for understanding. His father, an underpaid constabulary sergeant, could only cry. He realized his eldest was turning out to be a difficult boy.

Those who have dealt with him find him difficult to comprehend, and his intentions – for country or for self – much more difficult to figure out. To some intelligence officers he has worked with, he is a true-blue operator, cunning and heartless to a point.

An intelligence officer for 25 years, Mendoza has made life difficult, too, for Senator Panfilo Lacson. Going by the white papers traced to Lacson’s camp in the last two years or so, Mendoza is to blame for all the dirt hurled on Lacson and other influential people. The white papers brand Mendoza a kidnapper, a propagandist, an agent of Jose Almonte, the handler of slain Abu Sayyaf leader Edwin Angeles, the founder of the dreaded Red Scorpion Group (RSG), the adviser of Angelo Mawanay (a.k.a. Ador) who supposedly only used Colonel Victor Corpus as refuge, and so on and so forth.

The talk in the influential Chinoy community is that he is one corrupt cop out to ruin Lacson’s career. That talk threatens to doom Mendoza’s once-promising career, because to this day his bosses cannot even make up their minds about where best to assign him.

But Mendoza was Mendoza even before he set his sights on Lacson. Still, it is his quarrel with Lacson that has caused him to partly change his mind about living in the shadows forever.

“I know for a fact that Lacson ordered the killing of some of the kidnappers we had arrested. He knows that I know and I can tell him straight that he’s a nobody,” he tells Newsbreak in the first interview he’s ever granted for a profile.

Why the tough talk? “I’m out of the shadows now….All these charges against me have affected my career, anyway, so maybe I should just speak out.”

A 1978 graduate of the Philippine Military Academy (PMA), Boogie Mendoza (not related to, but known to be a close ally of, Philippine National Police chief Director General Leandro Mendoza) spent his first 5 months outside the academy in the jungles of Jolo.

But it was when he was assigned to Davao in late 1978 that he got a job that he ended up doing with gusto: spying on the communist movement.

Three years later, in 1981, then Lieutenant Mendoza bagged his first prized catch: Benjamin de Vera, who was secretary of the Mindanao Commission (Komid) of the Communist Party of the Philippines.

Using a woman who worked with the guerrillas as an informant (his favorite informants were women, he says), Mendoza zeroed in on the Komid, studied the rebels’ political discourse, memorized all the acronyms of their units and allies, read the books they read, and built a file on practically every single rebel in the unit.

“I told myself I have to shine in the field to make up for my [lackluster] performance at the PMA,” recalls Mendoza.

Mendoza is a “turnback,” a term used at the PMA to describe one who is suspended in the academy and made to retake the course from first year. He originally belonged to Batch 1977, but he flunked mechanical drawing and physical education in the first semester.

In fact, he took the PMA entrance exams twice. He knew he’d flunk the first time, he says, because he was dead drunk when he took them. Before this, he spent three years at the University of Pangasinan bumming around and wasting his father’s hard-earned salary as a Constabulary sergeant.

At the PMA, he did not excel either. That early, his interests suggested that he was not cut out for combat. He was not into any sport, preferring to spend time taking photographs of his mistahs and discovering for them dark corners in Fort del Pilar where they could drink and be merry.

But he beat all his mistahs in one subject in their senior year: strategy.

This somehow helped him navigate the nooks and crannies of the intelligence community. If one were to compare him, for example, with top spy Chief Superintendent Robert Delfin, now chief of the PNP Intelligence Group (IG), an agent who had worked with both of them say, “Boogie is more of a strategist, while Delfin is a tactician.”

The Cory Aquino years marked Mendoza’s heyday at the IG, when he served as its special operations branch chief. It was there where he mastered the art of psychological warfare and managed covert operations against guerrillas based in Metro Manila, particularly the Alex Boncayao Brigade (ABB).

“He did not go home, he did not relax because he pursued all angles. Hindi mo mabola,” recalls Superintendent Allen Bantolo, his sparring partner during that period.

Those years he was often encamped in his dungeon-like room in Camp Crame, wearing Lacoste shirts, denims, and rubber slippers, munching Halls candies while reading documents, and using Mongol pencils and yellow pad paper for his own charts on this or that rebel unit.

He did not completely avoid the media, as most undercover agents do. Instead, he gave select reporters and politicians – provided he was not identified as the source – documents, tips, and stories. Woe to those who swallowed them hook, line, and sinker.

Inevitably, the job made it difficult for him to trust anybody. Another agent who had worked for him says: “Tingin ko (I think) he was driven by idealism at some point, but psywar became his way of life, he did not trust anyone….Parang wala nang (It seems he didn’t have any) emotion sometimes.”

Mendoza admits as much when asked if he had real friends to speak of. “There’s no one I consider to be very close to me. I’m a loner and I know I should change this, if it’s not too late.” Mendoza says he even does not discuss problems at work with his wife, whom he met when he was a young lieutenant in Davao and she, a student at the Ateneo de Davao. They have 4 kids: two teen-aged girls and two young boys –  twins – aged 4.

Trust in him is also something that some people find difficult to foster.

This can be traced to allegations that, under the Ramos administration, he formed the RSG, a breakaway faction of the ABB that later turned into a kidnap-for-ransom gang. Its biggest hit was the abduction of American businessman Michael Barnes in 1992.

Lacson, who was then chief of Task Force Habagat, later showed as evidence against Mendoza mission orders that Mendoza supposedly issued to some RSG members that the task force had arrested. As a result, Mendoza was threatened with administrative sanctions, but with the feisty Haydee Yorac as his counsel, he was cleared by the PNP.

A top intelligence official says that the RSG was a Camp Crame project designed to divide the ABB but which “got out of hand.”

Mendoza’s career suffered a huge setback after that. He admits he got “depressed” over it but that he coped by treating the episode as “just an intelligence file that I could later go back to.”

He was put on floating status for a long time, then in 1998 briefly served as provincial commander of Zambales. He was pulled out of Zambales because of his suspected association with then presidential bet Jose de Venecia Jr. One of his former superiors says he’s turned off by Mendoza’s “political intelligence work.”

But Mendoza appears to be loyal to no one, going by his bullheadedness in deciding his own moves and crafting psywar tactics, says a former aide: “Kinakalaban niya maski mga boss niya (He would fight even his bosses). That’s his history.”

The situation is a bit different now.

Mendoza belongs to PMA Class ’78, considered the new power bloc under the current government because it has President Arroyo as its adoptive member. The President’s closest aides belong to this class.

After his trip to the US where he joined a police-military team that snooped into Lacson’s bank accounts, the PNP recommended Mendoza to be executive director of the newly created National Anti-Crime Commission.

It would have been his best chance at resurrecting a moribund career, but Mendoza lost the post to another 1978 member, presidential aide Army Colonel Carlos Holganza. Mendoza need not fret; he might yet be assigned police chief of his own province, Pangasinan, according to a Camp Crame source.

That’s assuming, of course, that his checkered past won’t haunt him there, where he once taught his fellow grade-schoolers to go against authority, the consequences be damned. – Rappler.com