Mar 14, 2012 8:27 PM PHT
Riziel Ann Cabreros
Facebook Twitter Copy URL
Copied
The New Code of Judicial Conduct states, 'Integrity is essential not only to the proper discharge of the judicial office but also to the personal demeanor of judges.'

MANILA, Philippines – Did Chief Justice Renato Corona embellish his academic achievements brandished on the website of the Supreme Court (SC) before it was altered just a few days ago?

Given some inconsistencies with records seen by Rappler, he might have been, at the very least, negligent or had allowed false claims to be made about him. At the most, he himself could have misrepresented his own achievements.

In his own resumé which he submitted to Malacañang in 1992, when he was assistant executive secretary for legal affairs of then President Fidel V Ramos, Corona said he finished grade school to law school in the Ateneo with honors.

Corona claimed too, in his resumé that he earned his Bachelor of Laws degree “with honors as no. 5 in the class of 44 members.” There were 44 students in his batch.

He likewise said he finished his Bachelor of Arts course “with academic honors.”

Our investigation shows these are not true. 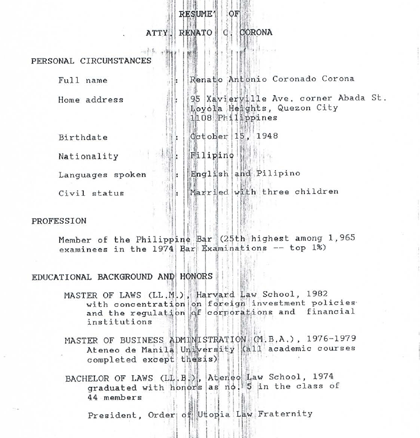 When asked about the university policy on inaccurate claims made by its alumni, Ateneo Loyola Schools registrar Joaquin Julian Agtarap said the university treats each case “uniquely” and handles such cases “confidentially.” He did not elaborate.

Even in the Supreme Court 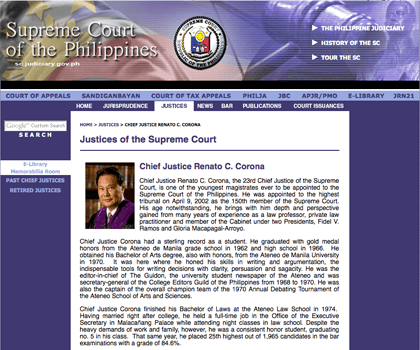 Commencement programs of his alma mater, however, reveal inconsistencies between his claimed scholastic achievements and university records.

The commencement programs, distributed during graduation ceremonies, are public records, and contain the list of graduating students, along with those who graduated with honors. They mirror actual university records.

Following requests by this writer to get Corona’s side since last February, the Supreme Court website had been altered by the last time we checked on Wednesday, March 14.

In 2010, Marites Dañguilan Vitug wrote in Shadow of Doubt that university records “don’t reflect” Corona’s claim in his profile, posted on the High Court’s website.

As of March 9, the last time we checked the SC website, no changes had been made. By March 14, the site was sporting a new look, coinciding with the resumption of the impeachment trial and presentations by the defense counsels of Corona. It also said it was under reconstruction and that some links may not be working. In college, a commencement program dated April 19, 1970 indicates Corona graduated with a Bachelor of Arts degree. He did not qualify for academic honors, as  he claimed in his resumé and on the SC website. Incumbent SC Associate Justice Antonio T. Carpio and the late activists Edgar M. Jopson and Emmanuel F. Lacaba were among his batchmates in college. Jopson was the valedictorian of Corona’s high school batch.

Corona graduated from the High School department of the Ateneo on April 30, 1966 and was merely awarded a silver medal under the category of “Activity Awards.” This was for his involvement in the Science Club.

But he was not a part of the elite list of those who graduated with honors, contrary to claims in his resumé and the SC website. From the grade school, he graduated on March 22, 1962 with an “Honorable Mention” academic award, and not a “gold medal” as claimed in the SC website.

The gold medal he received was for an “Academic Contest Award” in spelling (Pilipino).

Corona’s Supreme Court write-up says that “Despite the heavy demands of work and family [in law school], however, he was a consistent honor student, graduating no. 5 in his class. That same year, he placed 25th highest out of 1,965 candidates in the bar examinations with a grade of 84.6%.”

“Chief Justice Corona had a sterling record as a student. He graduated with gold medal honors from the Ateneo de Manila grade school in 1962 and high school in 1966. He obtained his Bachelor of Arts degree, also with honors, from the Ateneo de Manila University in 1970. He was appointed by then President Gloria Macapagal-Arroyo in 2010,” the write-up in the new website says.

According to the Law School’s commencement program, he graduated on March 31, 1974 with a Bachelor of Laws degree. He graduated with no honors.

It was Arturo D. Brion, now an associate justice of the Supreme Court, who graduated valedictorian with a gold medal for academic excellence. Corona married right after college and held a full-time job in the Office of the Executive Secretary in Malacañang while attending night classes in law school. It was despite this heavy load that he excelled academically, his writeup says.

After law school, he pursued a “Master of Business Administration course (without thesis) at the Ateneo Professional Schools.” In 1981, the SC website says, Corona was accepted to the Master of Laws program in Harvard Law School where he focused on foreign investment policies and the regulation of corporate and financial institutions. “He was conferred the LLM degree by Harvard Law School in 1982.”

How could there be inconsistencies between the claimed and actual scholastic achievements of Corona? Who should be held accountable for factual inaccuracies?

The SC Public Information Office (PIO) is in charge of maintaining and updating the website. We tried to reach SC PIO Chief Midas Marquez for comment but he did not reply to all our requests.

We also sought comment from Corona’s office, but lawyer Angelica Gascon said they are refraining from releasing any comment, considering the ongoing trial against the Chief Justice. Corona is now on trial before the Senate acting as an impeachment court for alleged graft and corruption, betrayal of public trust, and culpable violation of the Constitution.

We were asked to course our queries through Corona’s counsels instead, but as of this writing, no responses were received. Neither Corona nor Cuevas issued any comments or responses.

Considering the similarity of information contained in his own resumé and his previous write-up in the SC website, it appears that Corona was himself the source  of information in the website of the High Court.

Breach of Code of Judicial Conduct

Former senator and veteran lawyer Rene Saguisag said this should not be allowed to pass.

Canon 2 of the New Code of Judicial Conduct adopted by the Philippine judiciary in 2004 explicitly states, “Integrity is essential not only to the proper discharge of the judicial office but also to the personal demeanor of judges.”

For Saguisag, lying and embellishing academic achievements on Corona’s part is a violation of this code. He also said it is relevant in determining Corona’s moral fitness to stay as Chief Justice.

Corona was one of 6 graduates who got top honors during ceremonies that commemorated the university’s quadricentennial celebrations. UST, invoking academic freedom, had acknowledged it waived its usual dissertation requirement for the grant of a doctorate to Corona. – Rappler.com

Riziel Ann Cabreros, a researcher for Marites Dañguilan Vitug’s upcoming book on the Supreme Court, works with ANC as segment producer of PIPOL and as news writer.