Editor’s Note: This story was originally published on www.newsbreak.ph on July 20, 2011. 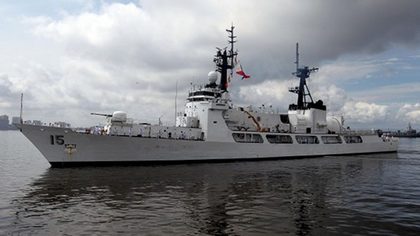 CALIFORNIA—“Requesting permission, sir, to carry out the mission to return to the Philippines.”

Philippine Navy Captain Alberto Cruz uttered these all-important words softly, almost privately—away from the chatter of supporters and onlookers—to the Flag Officer in Command (FOIC) of the Navy, Vice Admiral Alexander Pama, at around 1530 hours on July 18 in Alameda, California.

With permission granted, Cruz then boarded the BRP Gregorio del Pilar to steer the new crown jewel of the Philippine Navy on her journey of approximately a month to her new homeport.

Earlier, the rituals of departure that naval tradition calls for whenever a ship is deployed on an important mission were conducted by the ship’s 95-person crew, leaving the crowd of about a hundred supporters tearful.

The emotion of the moment was not lost on the ex-Philippine Navy officers present (all of them alumni of the Philippine Military Academy, where Pama, Cruz and the other top officers of the BRP GdP also graduated from) as they remembered their years aboard the rickety ships of the Navy and watched with a large amount of pride this big new ship the likes of which they could only dream about when they were in active service.

It took more than an hour before the former Hamilton class cutter was actually able to leave port. A minor propeller problem had to be repaired before the U.S. Coast Guard tugboat could steer it out of the dock. When she finally sailed, the dwindled crowd of wellwishers cheered and waved tiny Philippine flags as the crew unfurled a hastily made banner that said, “Maraming salamat sa inyong lahat.”

Pama, recording the departure on both his cell phone and tablet computer, was visibly proud as he watched the 92 men and three women under his command sail away. Earlier, in a moment of nostalgia for his days aboard ship, he had wished that he was on board with them.

The BRP Gregorio del Pilar is the first of three major vessels the Philippine Navy will acquire “hopefully by the end of the year,” according to Pama.

Funding for the acquisitions—part of the military modernization plans of the Aquino administration—will come from the Department of Energy’s six billion-peso allotment for oil exploration and coastal protection.

It will not be the first time this particular ship – the WHEC-715 – will dock in the Philippines.

On her initial deployment in 1969, she sailed from Panama to Subic Naval Base, where she docked for four days before proceeding to South Vietnam to carry out the mission of preventing weapons smuggling from North Vietnam at the height of the war.

After her wartime mission, the 715 was used by the US Coast Guard for anti-drug smuggling duties and rescue operations in various countries until her final decommissioning last March.

The Philippine government bought the Hamilton class cutter early in 2011 for approximately US$13 million (Php450 million) under the Foreign Military Sales (FMS) program.

Once the largest ship of the American Coast Guard, this is the first gas-turbine jet engine-powered vessel in the Philippine Navy fleet, making it the fastest, biggest and most powerful among the service’s aging inventory.

She is described as “a high endurance cutter with close-in weapons system” and features a helicopter flight deck with a retractable hangar, with capabilities for rescue operations and maritime law enforcement.

At the helm of the BRP Gregorio del Pilar is Navy Captain Alberto Cruz, a graduate of the Philippine Military Academy (PMA) Class of ’88.

An amiable, soft-spoken guy whose easy-going style belies years of experience in commanding naval ships and people, his all-important mission is to deliver this very valuable vessel across the Pacific to the Philippine waters safe and intact.

Not an easy task considering that this is the first time he and his crew will traverse this lengthy route, and the first time they will navigate this ship with her unfamiliar technology for an extended period in the open sea without the assistance and know-how of its former American crew.

To top it all, they will be arriving in the Philippines right smack into typhoon season.

But if there’s any group up to the challenge, it’s this crew of naval officers and sailors who have been handpicked by the Philippine Fleet Command (a special committee of top naval officials) based on their exemplary service and experience.

“It’s safe to say that this crew, from the Commanding Officer down to the lowest ranking enlisted man, is the ‘crème de la crème’ of the Philippine Navy,” retired Philippine Navy Captain Archie Almario says.

“You don’t send someone with a checkered service record to an international mission as important as this. This [assignment] is both a recognition of their talents and a reward for their good work.”

Cruz and the seven other naval officers and 13 enlisted men/engineers that formed the initial group that trained with the Hamilton command were assigned in various naval ships stationed in different areas of the archipelago when they got the call from their superiors last January. Report to [the Philippine Navy headquarters] Manila for a new assignment was the missive. There they were told of the government’s acquisition and the role they would play in the process.

As commanding officer, Cruz had his complete crew already chosen for him. Among the seven are the executive officer Navy Commander Reynaldo Lopez (PMA Class 1992) and Lieutenant Junior Grade Andrelee Mojica (the valedictorian of PMA Class of 2007), the damage control officer, who is one of three women officers on the ship.

The first weeks of their new assignment were a whirlwind of activities for the chosen 21.

All underwent rigorous physical exams and intensive neuro-psychiatric evaluations (NPE), the latter crucial in determining whether each person had the mental and psychological capacity to withstand the challenge of being away from their families for an indeterminate period, the stability to face up to the pressure-cooker demands of a new environment in a different country, and the rigor to learn new technologies and procedures within a relatively short period of time.

Cruz credits the NPE evaluation for the relatively problem-free dynamic that currently governs the quality of interaction among the ship’s crew. “We had met each other before [this mission], but only casually,” the commanding officer says. “But somehow we bonded immediately.”

On February 25, 2011, the group landed in San Francisco and were immediately whisked to Alameda (about 20 minutes away) to board the USCGC Boutwell, the sister ship of the Hamilton, for hands-on training.

What they didn’t anticipate was that they would be cut off from all communications with the outside world for two full months as the Boutwell crew carried out a highly classified US Coast Guard anti-drug smuggling operation that brought the vessel to as far as Ecuador and El Salvador.

With no telephone or Internet access, the Filipino navymen on board joked among themselves that they had become a “lost command.” Worse, they had to endure meals without rice for weeks on end, which as we know, is tantamount to torture for Filipinos from the Philippines.

“We had salad, potatoes, meat, potatoes and potatoes,” one of them remarked. No wonder they had to go through the NPEs. They were only allowed to check in with their families when the tsunami in Japan happened.

When the Boutwell returned to San Diego, the Hamilton cutter was ready to sail for Alameda for the formal turnover to the Philippine government. Cruz and his crew were given permission to ride with the ship to her new destination, but as passengers, since training on the actual vessel (already named Ex Hamilton after its decommissioning) would start only after the May 13 ceremony.

With the Hamilton rechristened Gregorio del Pilar, Cruz took command of the vessel.

The rest of the crew were flown in from the Philippines to work alongside their American counterparts. By then, the original 21 have had enough experience with gas turbine engine technology to be confident that they would be able to get the ship to sail.

For a journey across the Pacific, however, more weeks of intense training were required.

Finally, in early July, they did a four-day run at sea along the coast of California for a test of the crew’s capabilities and the ship’s sea-worthiness. After that, the American trainors de-boarded and the Filipino naval officers and men were on their own. As soon as she reaches her new homeport, the BRP Gregorio del Pilar will undergo some refurbishing before deployment to the Spratlys.

When confronted with the usual saber-rattling by powerful nations during territorial disputes, the Philippines now has a gleaming big saber to brandish in return. — Newsbreak