The Ghost of Cherry Hills 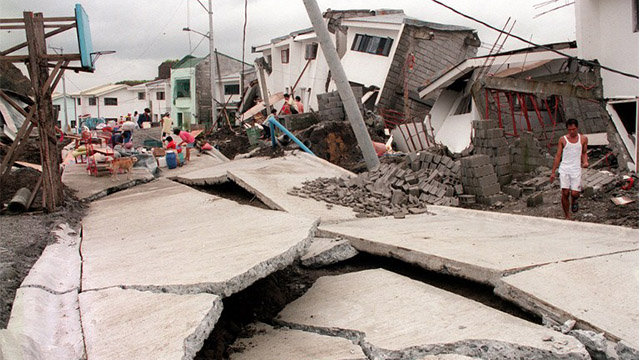 (Editor’s Note: This story was first published by Newsbreak.)

MANILA, Philippines – The warning signs were there five years before the tragedy occurred—hairline fissures on the walls and pavements of the subdivision. But like many warnings, those that were noticed in Cherry Hills in Antipolo City were either misread or ignored.

Residents and developers blamed each other. The former accused the latter of using substandard materials for the low-cost housing project. Developers insisted that the housing renovations made by the residents had caused the fissures.

By the time both sides realized the gravity of the situation, it was too late. As they prepared to leave the area amid the heavy rains, residents found themselves trapped in their own homes. Houses slid down the subdivision’s slopes, putting those in the lower areas under 45,000 cubic meters of mud, rocks, and concrete. People were buried alive. At least 58 people died that rainy day of Aug. 3, 1999.

Much soul-searching and finger-pointing have been made since. In September last year, a local court ordered the arrest of three officials of the Philippine-Japan Solidarity Corp., which built the subdivision. The officials—including company president Tirso Santillan, general manager Hiroshi Ogawa, and assistant general manager Eleazar Rodriguez—were charged with violation of presidential decree 957 or the Subdivision and Condominium Buyers’ Protective Decree. They posted bail.

Early this year, the Housing and Land Use Regulatory Board ordered the company to pay damages estimated at P89 million and return the payments previously made by the residents. The company has appealed the decision.

Heavy rains triggered the disaster. Rainfall measurements three days prior to the landslide were equivalent to 120 days of normal rainfall in a rainy season, according to a report of a fact-finding committee. Actual rainfall recorded during that period totaled 523.3 millimeters. The normal amount of rainfall for the entire month of August, based on a 35-year record in the weather bureau’s Quezon City observation station, was 517.3 millimeters.

Developers claim that the unusually huge volume of water that seeped into Hill 255, where Cherry Hills was located, caused enough pressure that triggered the subdivision’s collapse.

But geologists based in the University of the Philippines (UP) argue that while heavy rains may have set off the disaster, they claim that certain geological characteristics of the area made the subdivision vulnerable to landslide. The rains could not have been the sole factor behind the tragedy, they add.

Post-mortem examination by the same geologists noted that the rock bed under the houses consisted of alternating porous and impervious rocks as well as a significant amount of clays “of probably the swelling type.” They concluded that “expandable clays when saturated with water are natural planes of slippage.” The natural slope of the ground, its sparse vegetation, as well as pre-existing fractures in its rock bed made the land area very weak.

Had a geological survey been done before the houses were built, the disaster could have been avoided, according to UP geologists. The study would have determined the presence of fissures, the composition of the soil and rocks in the area, and their reaction to seismic and other potential disturbances, they add. The developers would have been advised to adjust their construction plan to prevent a disaster.

But the same geologists tell Newsbreak that those structural interventions would have made the cost of the project prohibitive for the low-income sector. “Engineers will always say they can remedy anything,” says Dr. Victor Madlambayan, who conducted the study on Cherry Hills. But the question is whether developers are willing to spend more for it, he adds.

Given the huge backlog in mass housing, developers of low-cost housing units in the past were not strictly subjected to environmental regulations, according to a source at the Mines and Geosciences Bureau (MGB) of the Department of Environment and Natural Resources (DENR).

The same source says that until the Cherry Hills disaster, developers were not required by the department to conduct environmental impact assessments of their target area. “To get an environmental compliance certificate all they had to do was submit a project description,” he says.

The reason has everything to do with cost. It’s easy to ask qualified geologists to conduct an engineering, geological, and geohazard assessment (EGGA) of a housing project. One could hire an expert for P60,000 or even lower. But developers will then have to follow recommendations made by the same geologists to ensure that the buildings they will construct are structurally sound. These could inflate construction costs.

At the time of the tragedy, it was only Baguio City, traumatized by the 1990 earthquake, that required developers to first seek certification from the MGB before they could start building a subdivision.

The Cherry Hills disaster changed all that.

On March 14, 2000, the DENR issued an administrative order requiring developers of housing projects and other infrastructure projects to conduct an EGGA of the area before they are issued an environmental clearance certificate.

Developers are now complaining that the MGB is too strict about these requirements, the MGB source says. “We tell them that in the end this will benefit them because people will be assured that the houses they are building are safe.”

Nature may have finally taught government and the private sector a lesson—though that came at a heavy price. – Rappler.com