Arrest of 3 senators may take a while 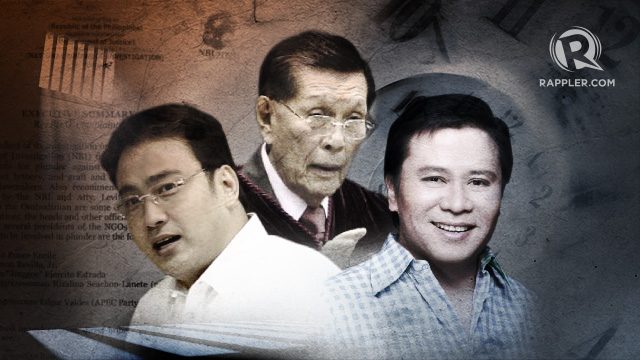 Facebook Twitter Copy URL
Copied
Going by similar high-profile cases in the past, Senators Enrile, Estrada and Revilla, all accused of plunder, may not be sharing the same cell in the next few days, or even weeks

MANILA, Philippines – What awaits Senators Juan Ponce Enrile, Jinggoy Estrada and Ramon Revilla Jr and their co-accused in the plunder case set to be filed by the Ombudsman before the anti-graft court?

Going by similar high-profile cases in the past, they may not be sharing the same cell in the next few days, or even weeks.

For instance, it took the Sandiganbayan 3 weeks to issue an arrest warrant against former president Joseph Estrada for alleged ill-gotten wealth supposedly obtained from kickbacks and commissions collected from an illegal numbers game and stock manipulation.

In the case of former President Arroyo, the anti-graft court even took a longer time – about 3 months – before it issued a warrant in connection with the alleged misuse of a P366-million intelligence fund of the Philippine Charity Sweepstakes Office.

On the extreme, Estrada’s co-accused, businessman Jaime Dichaves who immediately went into hiding when his bosom buddy was indicted, remains a free man 13 years from the time the plunder trial started, through clever legal defense.

With the Ombudsman’s denial of the motions for reconsideration filed by all the accused in relation to the plunder charge, the green light for the filing of the complaint before the anti-graft court is now lit. (READ: Napoles, 3 senators to be charged before Sandigan)

Among the accused, only Napoles is in jail, but this is in connection with the illegal detention case filed by principal pork barrel whistleblower Benhur Luy. Like illegal detention, plunder is supposed to be a non-bailable offense.

How soon can the accused be locked up in jail?

That depends on the Sandiganbayan justices handling the case, and deadline-beating orders from the Supreme Court, a ranking official of the Ombudsman explained.

Highly improbable but not impossible, the arrest can be effected within the same day the complaint is filed before the anti-graft court, the Ombudsman official said.

But this is highly dependent on the timing of the filing, as well as the predisposition of the justices.

Upon receipt of the complaint, the case will be raffled to any of the 5 divisions in the Sandiganbayan. Raffling of cases is done every Friday only, but in some cases, the anti-graft court may order the conduct of a special raffle any day of the week. A division is composed of 3 justices.

Assuming that the pork barrel case is filed on a Friday, then the raffle can be held on the same day. Copies of the complaint should be distributed to the 3 justices for their review. The justices should then conduct a judicial determination of probable cause to proceed with the case.

Assuming further that 3 magistrates are convinced there is probable cause on that same day, they can immediately issue the arrest warrants, tasking the Sandiganbayan’s sheriff office to implement their order. Arraignment can be set since the Court has now acquired jurisdiction over the accused.

Motion for judicial determination of probable cause

Can this be fast-tracked?

Theoretically, yes, according to the Ombudsman official who requested anonymity. “If the justices resolve that the case itself is imbued with public interest, then they can hasten the process.”

Alexis Abastillas, who serves as counsel for Estrada in the plunder complaint, agreed that technically, such scenario is possible since they have discretion over how the case should proceed.

But, she argued, such a hasty move may be tantamount to violation of the constitutional right to due process. Incidentally, both camps of Estrada and Revilla have already asked the Supreme Court to stop the Ombudsman from proceeding with the plunder case.

Procedurally, once the complaint is filed, the immediate remedy is to file a “motion for judicial determination of probable cause” that could buy time for the accused, Abastillas said.

Once this motion is filed, the Court will require the Ombudsman to answer the defense’s motion. This may take at least 15 days.

In the meantime, while the motion for judicial determination of probable cause is pending, the issuance of the arrest warrant is held in abeyance. If the Court sustains the Ombudsman’s finding, only then can the arrest warrant be issued.

If their motion for judicial determination of probable cause is denied, the respondents could file a motion to quash, attacking the criminal complaint as defective.

But such motion may not be of much help to the respondents. Since the issue being brought up is not on probable cause, the Court may issue the arrest warrant even if the motion is still unresolved.

In any event, the respondents may elevate their case to the Supreme Court for a reversal of the Court’s ruling on the motion for judicial determination of probable cause as well as the motion to quash. Their petitions will likely include the issuance of a temporary restraining order barring the Sandiganbayan from proceeding with the case.

If the TRO is granted, the arrest of the respondents effectively grinds to a halt.

The only caveat is that the TRO must be granted before the anti-graft court issues the arrest warrant. Otherwise, their plea for a TRO will be rendered moot and academic.

No TRO from SC

But what is the likelihood that the SC will issue the TRO? Recent developments in the High Court do not raise the bar of hope for the respondents.

The SC has not issued a TRO on the separate petitions for certiorari filed by Revilla and Estrada accusing the Ombudsman of grave abuse of discretion. (READ: SC to ‘pork’ scam probers: Comment on Jinggoy’s plea)

The two said the Ombudsman violated their constitutional right to due process when Ombudsman Conchita Carpio Morales failed to furnish them copies of the counter-affidavits of the respondents in the case.

In the absence of a TRO, the Sandiganbayan can fully proceed with the case, as what the Ombudsman did when Morales denied  the separate motions for reconsideration filed by the respondents, the Ombudsman official said.

What about the case of Dichaves who still roams freely even after his co-accused former President Estrada was found guilty of plunder?

Dichaves was indicted by the Ombudsman for plunder after he was found to be Estrada’s alleged dummy in the Jose Velarde account where millions of pesos in bribe money for the forme president was supposedly deposited.

Dichaves went into hiding during the plunder trial. He surfaced 4 years after Estrada was convicted and had been pardoned by his predecessor, Arroyo.

Initially, an arrest warrant was issued against Dichaves but he was able to have this revoked after convincing the anti-graft court that the Ombudsman acted with grave abuse of discretion in indicting him. The Sandiganbayan then ordered a reinvestigation of his case.

Expectedly, the Ombudsman sustained its initial finding but just before the anti-graft court issued the arrest warrant and set his arraignment, Dichaves brought his case to the SC with a petition for certiorari. In July 2013, he was granted a TRO by the SC.

Recent reports said the Ombudsman has asked the SC to lift the TRO, arguing that it acted within its powers when the Office charged him with plunder. Almost a year since the TRO was issued, his case is still in limbo.

At this stage, the respondents in the pork barrel case can only hope that what worked for Dichaves will also work for them. – Rappler.com