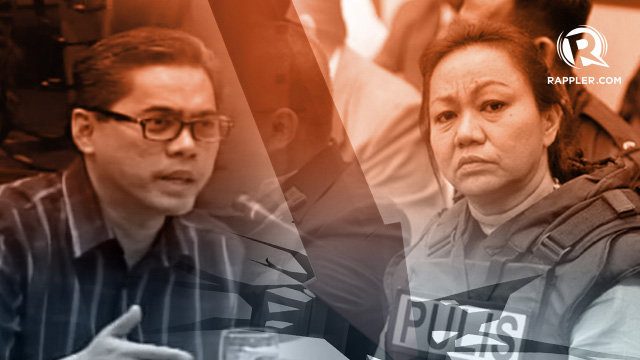 Facebook Twitter Copy URL
Copied
It was a risky gambit they played, but they are now left holding an empty bag, lawyers Baligod and Benipayo say

The poster queen of the pork barrel controversy, Janet Lim Napoles, appears to be the biggest loser in the race for state witness immunity after the Ombudsman rejected her plea to be state witness. Not far behind is Technology Resource Center director-general Dennis Cunanan, whose application for state witness was flatly turned down by Ombudsman Conchita Carpio Morales.

Separately, they took risks to get exemption from prosecution by offering to tell all. In the case of Napoles, she dug her own grave by admitting she is at the center of the pork barrel scandal. Cunanan for his part, promised to cooperate with authorities in pinning down lawmakers involved in the scandal.

Lawyer Levito Baligod, former counsel of principal whistleblower Benhur Luy, could only commiserate with Cunanan, who provided leads and testimonies to the Department of Justice to strengthen the case against the 3 senators involved in the pork barrel scheme.

“I think the Ombudsman committed a mistake in not admitting Cunanan as state witness. It could also send a chilling message to other future whistleblowers that they have no assurance they will be immune from prosecution,” Baligod said.

Baligod said Cunanan should already be enjoying a state witness status after Justice Secretary Leila de Lima took him in the Witness Protection Program. “They even had a memorandum of agreement signed between Cunanan and Secretary de Lima,” Baligod said.

Baligod explained that there are 4 ways by which an accused can become state witness:

Clearly, Baligod said the first two laws allow Cunanan to be state witness, a fact he was assured of when he was meeting with DOJ prosecutors even before.

“The DOJ got leads from Cunanan. He was asked to reveal what he knows. He submitted affidavits and when the DOJ asked him to provide more details, he gave more details,” Baligod said.

“In exchange for his immunity, he cooperated with the authorities,” the lawyer added.

The TRC, which Cunanan headed, was used as conduit in the abuse of the pork barrel allocation of several lawmakers, including senators Juan Ponce Enrile, Jinggoy Estrada and Ramon “Bong” Revilla Jr.

Proceed at your own risk

Cunanan testified that he called Estrada and Revilla to verify their signatures in the pork barrel documents while he talked with Enrile’s former chief of staff Jessica Lucila “Gigi” Reyes. He also denied receiving a cut from the pork barrel scheme, although Luy said Cunanan got a 10% commission. (READ: PDAF scam: 5 questions on Dennis Cunanan)

Issues about his lifestyle and alleged ill-gotten wealth cropped up following his testimony in the Senate blue ribbon committee investigation.

With the DOJ granting Cunanan state witness status and the Ombudsman rejecting it, Baligod said “there is an incongruity in the situation that needs to be reconciled.”

Worse, it could strike fear in other would-be whistleblowers from coming out. “You go out at your own risk only to be left in the cold,” Baligod said.

Apart from Cunanan,  the other potential whistleblowers who were denied by the Ombudsman are Rhodora Mendoza and Victor Cacal, both of the National Agri-Business Corp (Nabcor). Mendoza and Cacal have issued affidavits detailing the misuse of funds by former Nabcor chair Alan Javellana.

Javellana is among those mentioned by Luy as frequent visitors of Napoles in her Discovery Suite office. He remains at large.

Cunanan’s fate, however, may not be as bad as that which befell Napoles, who had practically admitted her guilt with her affidavit.

Apart from the 3 senators, Napoles dragged other high-profile lawmakers and personalities in her pork barrel web. She also provided details on how the P900-million Malampaya Fund found its way into her bogus non-governmental organizations. (READ: Napoles affidavit tags more than 100 lawmakers)

In exchange for her explosive affidavit, she sought immunity for herself as well as her children, Jo Christine and James Christopher. The Ombudsman however said Napoles “appears to be the most guilty among the respondents.” (READ: No immunity for Napoles, says Ombudsman)

Baligod said Napoles’ affidavit can be “treated as a confession,” which is an admission of guilt at the very least.

But what if she recants? That would be difficult, considering she issued her affidavit voluntarily and in the presence of her preferred counsel, Baligod pointed out.

While she practically dug her own grave, Baligod said her affidavit cannot be used to implicate or indict the personalities mentioned in it. “There must be independent proof or evidence to establish conspiracy.”

Lawyer Lourdes Benipayo, who also serves as counsel for some of the whistleblowers, agreed with Baligod that Napoles’ affidavit cannot be used to go after the people named in her affidavit. At the very least, it only provides a birds’ eye-view of who the other characters involved in the pork barrel scam are.

Benipayo pointed out that Napoles’ tell-all testimony was given on condition that she turn state witness and that the immunity extend to her children. Since these conditions were not met, “then the affidavit is a mere scrap of paper.”

As it is, Napoles still enjoys the constitutional right against self-incrimination “that anything incrimating you say cannot be used against you,” Benipayo said.

“That affidavit cannot be used against her since the conditions were not met. Not until she is accepted as witness. But since she is not accepted as state witness, it is as if she did not submit any affidavit,” she said.

Benipayo said her affidavit will have to be excluded as evidence in the trial proper. – Rappler.com