Jul 27, 2014 1:11 AM PHT
Aries Rufo
Facebook Twitter Copy URL
Copied
Known for their religious discipline, INC leaders have managed to create an effective vote-delivery system that rivals or even betters the vote delivery mechanism of even the most organized political party 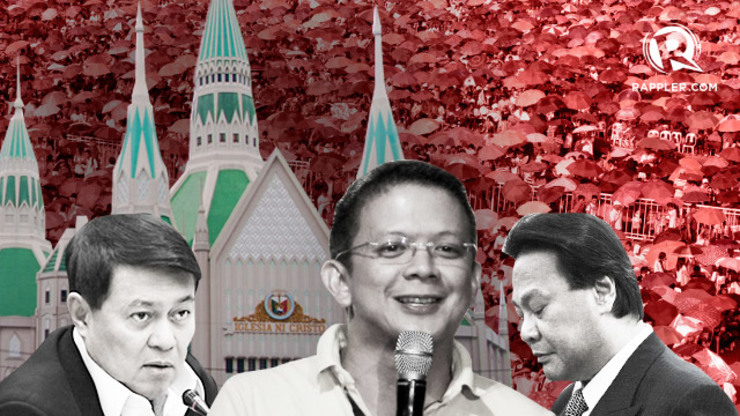 MANILA, Philippines – Two days before the May 13, 2013 mid-term elections, the Iglesia ni Cristo finally released its highly anticipated list of  “anointed” ones for the senatorial race, with marching orders to its members to cast their votes for them – or else commit the sin of disobedience.

The list contained 7 administration and 5 United Nationalist Alliance bets. All, except 2 – Jackie Enrile and one-time presidential candidate Richard Gordon – managed to make it to the winning circle.

But as early as May 6, or a week before the polls, word had already leaked that the bloc-voting sect had chosen its 12 preferred candidates. Surprisingly, the INC had opted not to carry this time its perennial fair-haired boy, Senator Francis Escudero.

The INC has nurtured Escudero as an ally from the time he first joined the political circus in 1998, as congressional representative of the 1st district of Sorsogon. It was a relationship that was actually nurtured by his late father, Salvador Escudero III, who was also former Sorsogon representative and agriculture secretary during the time of strongman Ferdinand Marcos and President Fidel Ramos.

When Escudero, after serving out 3 terms in the House of Representatives, sought a Senate seat in 2007, the INC was also there to prop his bid. He finished a strong second behind Loren Legarda, cornering about 70% of the votes cast in the senatorial race.

A year before the mid-term polls, pre-election surveys showed him initially neck and neck with Legarda over the top spot, although by April, one survey showed he had dropped to 5th place based on voter preference.

But the INC snub all but sealed Escudero’s fate – a failure to repeat or even better his performance in the 2013 senatorial race. When news broke out that the INC has dropped him, Escudero sought to downplay the situation.

“I respect the decision of the INC who they want to campaign for. I have no right to be disappointed,” Escudero told reporters on the campaign trail. He wound up 4th place, behind Grace Poe, Legarda and Alan Peter Cayetano. All 3 were endorsed by the INC.

Escudero may hide his disappointment over his disappointing finish, but clearly, the INC backlash was a factor. He could have given Poe a strong challenge had the INC bloc-voting been in his favor.

How did he fall from the INC’s grace? He betrayed the INC powers-that-be, not once but twice.

An INC member, who has access to its reclusive hierarchy, said Escudero turned his back to his erstwhile political patrons on two occasions – when the Senate presidency was at stake, and during the impeachment trial of Corona.

Shortly after the elections in 2010, Aquino, or for that matter, the ruling Liberal Party, wanted Senator Franklin Drilon to be the next Senate President. But the INC was lobbying for Senator Manny Villar, who despite not getting the nod of the INC in the presidential race, had carved a soft spot in the INC leadership. Villar, after all, was the first candidate to seek out the INC support when he threw his hat in the presidential ring.

The INC was counting on Escudero to help Villar save face by regaining the Senate presidency. But the INC’s favorite son would not hear of it. “Doon unang nagtampo any INC kay Senator Escudero,” the INC source said. (That was the first time the INC felt rebuked by Senator Escudero.)

Torn between party loyalty and political indebtedness to the INC, a Solomonic solution was reached: to retain Senator Juan Ponce Enrile in the Senate presidency. A Senate press release said Enrile was voted as “unity Senate President.”

The second time that the INC felt it was let down by Escudero was during the impeachment of former Chief Justice Renato Corona. “Corona has helped the INC and the INC is just returning the favor. Besides, at the time, the relationship between Aquino and INC had already turned frosty,” the INC source said.

Reportedly, Escudero, along with 6-7 senators, had given their word to the INC that they would not vote to convict Corona for betrayal of public trust and culpable violation of the Constitution. Sixteen votes were needed to secure a conviction, and the INC was counting on Escudero and 6-7 of their Senate allies to stave off a guilty verdict.

While other senators who were supported by the INC also cast a guilty verdict – Legarda, Jinggoy Estrada, Ramon “Bong” Revilla Jr, Vicente Sotto, and Enrile – Escudero’s case was different.

The church did not forget. It withdrew political support just when it was needed most.

After bolting the Nationalist People’s Coalition (NPC) in the run-up to the 2010 presidential race over funding arguments with NPC kingmaker Eduardo “Danding” Cojuangco, Escudero was regarded as a political pariah by some politicians. In the 2013 mid-term polls, he identified himself as independent, although he ran under the Team PNoy coalition of Benigno Aquino III.

Escudero did not reply to Rappler’s requests for an interview.

From rag-tag to potent force

The case of Escudero illustrates the evolution of the INC from a minor religious sect at the start of the 20th century to a potent political force in the 21st century. “In the political equation, the INC is one sector in itself,” De La Salle political science professor Gladstone Cuarteros said.

During elections, it has been a tradition for candidates, from the local to the national levels, to make a pilgrimage to INC leaders to secure their support. Part of the attraction of the INC is that its leaders do not engage in negative campaigning, De La Salle professor Allen Surla said. “You do not hear them criticizing this or that candidate. They just endorse. From a political viewpoint, that is more alluring to the politician.”

From a religious viewpoint, however, such “sterilized preaching is detached from reality,” a retired Catholic archbishop opined. “On one hand, it could be beneficial since you do not incur enemies. On the other hand, such preaching lacks a social dimension. It remains in the realm of the spiritual.”

Until recently, the Roman Catholic Church, the dominant religion in the country, did not engage in negative campaigning although it stopped short of naming names. In the 2013 mid-term elections however, some bishops crossed the line by campaigning against some senatorial candidates perceived to be against Church teachings. (READ: 5 more bishops campaigning vs ‘Team Patay’)

The INC mainly draws its political strength from the power of its bloc-voting, where members are dictated by the higher-ups who to vote for in elections. Known for their religious discipline, INC leaders have managed to transform this into an effective vote-delivery system that rivals or even betters the vote delivery mechanism of even the most organized political party.

Some say it is a kind of blind faith, since the choices appear to be discretionary on the part of the INC higher-ups. There is no particular set of criteria that determines why one particular candidate is chosen over the other, with loyalties shifting, depending on where the political tide is headed. In contrast, the Catholic Church lays down certain qualities that voters can use to discern in voting for or rejecting a particular candidate.

Political observers say the INC hierarchy first realized this potential power in tight local races, where bloc voting can help secure electoral victory. Like a domino effect, it spread to gubernatorial and congressional races, and invariably, in national elective positions.

Electoral coverage by the media on who the INC would vote for helped secure the sect’s reputation as a political force. Although there were criticisms that the INC list, especially in national races, are likely winners just the same based on pre-election surveys, media reports on the INC announcement with much anticipation.

Inevitably, this attraction to the INC has spawned copy cats from other preachers with a cult following – the El Shaddai group of Brother Mike Velarde and the Davao-based Kingdom of Jesus Christ, The Name Above Every Other Name of Pastor Apollo Quiboloy. But the INC is notches higher than these two self-styled religious leaders.

While national candidates pay their homage to Velarde and Quiboloy, their vote delivery power is at least questionable, unlike the INC where members literally follow the dictates of their Executive Minister, who is at present Ka Eduardo “Eddie” Manalo, the grandson of INC founder, Felix Manalo. – Rappler.com