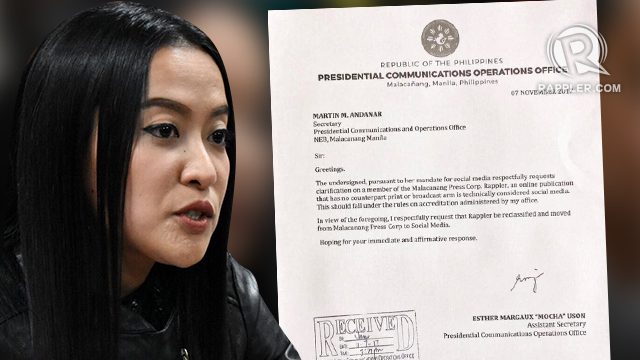 Facebook Twitter Copy URL
Copied
Because the Constitution guarantees freedom of the press, government does not have the power to regulate independent media

Uson said in her request:  “The undersigned, pursuant to her mandate for social media respectfully requests clarification on a member of the Malacañang Press Corp (sic). Rappler, an online publication that has no counterpart print or broadcast arm is technically considered social media. This should fall under the rules on accreditation by my office.”

“In view of the foregoing, I respectfully request that Rappler be reclassified and moved from Malacanang Press Corp (sic) to Social Media.” Uson’s request is misplaced on 3 counts:

1) Rappler is an independent private media company. Because the Constitution guarantees freedom of the press (Article III, Section 4), government does not have the power to regulate independent media.

2) The Malacañang Press Corps (MPC) is an independent group unattached to any government agency. It is neither under government control nor under the supervision of the Presidential Communications Operations Office (PCOO).

MPC by-laws are explicit on accreditation and cover online news organizations like Rappler. Section 2 under “Qualifications for MPC Membership” states: “For internet-based media, the reporter must represent a website affiliated with a duly-recognized print/radio/TV agency, or established online news organization with regular deployment of personnel in major beats.”

3) The PCOO’s Interim Social Media Practitioner Accreditation covers only individuals and not news organizations. Section 5 of the PCOO’s Department Order 15 is categorical: “Social Media accreditation shall be issued to a Filipino Citizen who is at least eighteen (18) years of age, with not less than five thousand (5,000) followers in any social media platform.”

This clearly does not cover Rappler, Incorporated, which is a registered media corporation. – Rappler.com