Claim: A blog post claims that Bill Pullman, who played the fictional United States President Thomas Whitmore in the Oscar-winning 1996 film Independence Day, “laughed at” Vice President Leni Robredo in a tweet for allegedly copying his character’s speech in the movie.

Robredo, in expressing support for Chief Justice Maria Lourdes Sereno in the face of a quo warranto petition in the Supreme Court, made a strong speech during a forum at the University of the Philippines (UP) on May 7. Robredo concluded her speech in a similar fashion to Whitmore’s speech in the film.

The claim, which was shared on at least 9 different Facebook groups and pages, was published on May 8 in philippineinsidernews.blogspot.com with the headline “Bill Pullman Laughs at Robredo for Copying his Speech at Independence Day Movie.”

It showed Pullman’s tweet captioned “Creative and very well done… Gave me a good laugh this morning,” seemingly alluding to Robredo’s imitation. The blog post said, “Netizens noticed the similarities between the lines of Pullman and VP Robredo, and made fun of it. The meme went viral and the actor reacted to it.”

The tweet appeared to be posted on the same day, as shown by the “20 minutes ago” timestamp.

A supposed screenshot of Pullman’s tweet in the blog post showed a meme with a comparison between the speech in Independence Day and Robredo’s speech. The meme included the logo and social media links of RJ Nieto, who goes by the monicker “Thinking Pinoy.” 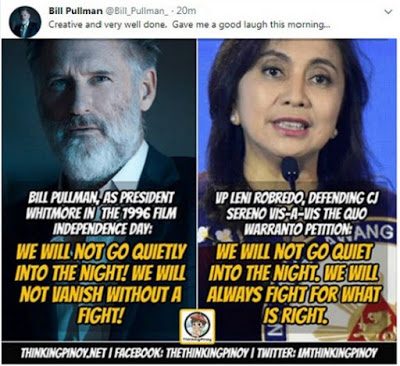 At least two blogs carried the same claim with the same headline and content, namely balita1.altervista.org and realspot.info.

Facts: Pullman indeed wrote the tweet, but it was made in February with an attachment related to a different matter altogether.

The screenshot of the tweet in the blog post was digitally manipulated. Pullman’s original tweet, which was posted on February 22, was in reaction to a YouTube video entitled, “Lone Starr A Spaceballs TEASER – Han Solo a Star Wars Story Style.” As for the speech itself, below is a side-by-side comparison of the speeches of Pullman, as the fictional President Whitmore, and Robredo:

While Robredo’s speech is similar to Pullman’s, neither party has acknowledged the situation nor directly responded to it.

The blog post also linked to another entry which has the headline “Robredo Won’t Apologize for Copying Bill Pullman Speech at Independence Day Movie.”

It even quoted the Vice President’s spokesperson Georgina Hernandez, saying, “The OVP (Office of the Vice President) categorically deny allegations that VP Leni Robredo copied her recent speech from the movie Independence Day. The message might be the same, but the difference in words is very obvious. The vice president also spoke from her heart, and there was no prepared speech for her.”

In a text message to Rappler, Hernandez said, “Those statements did not come from me. Definitely fake news.” In the OVP website’s press releases, there are no mentions of the issue. – Miguel Imperial/Rappler.com