Facebook Twitter Copy URL
Copied
The National Economic and Development Authority says what it showed during the press briefing was 'how a hypothetical monthly budget of P10,000 will be affected by a 4.6% inflation rate'

MANILA, Philipines – There was uproar on social media and strong criticism from labor groups and lawmakers over media reports that the National Economic and Development Authority (NEDA) supposedly said a Filipino family with 5 members needs only P10,000 a month to lead a decent life.

The reports presented a breakdown of expenses under a P10,000 budget, as shown by NEDA officials during the press briefing on the May 2018 inflation rate on Tuesday, June 5.

A TV report scrutinized NEDA’s food budget of P3,854 monthly or P127 daily. A reporter went to the market to check what P127 could buy.

In fact, the economic managers only said this is the budget that a typical minimum-income family works around with, based on their spending habits recorded by government 3 years ago.

What NEDA said: In a statement on Wednesday, June 6, NEDA said that it only showed “how a hypothetical monthly budget of P10,000 will be affected by a 4.6% inflation rate.”

However, NEDA Undersecretary Rosemarie Edillon failed to clarify this point with reporters during the Tuesday press briefing.

At the start of the briefing, Edillon said the table was based on the budget of an “average Filipino family.” 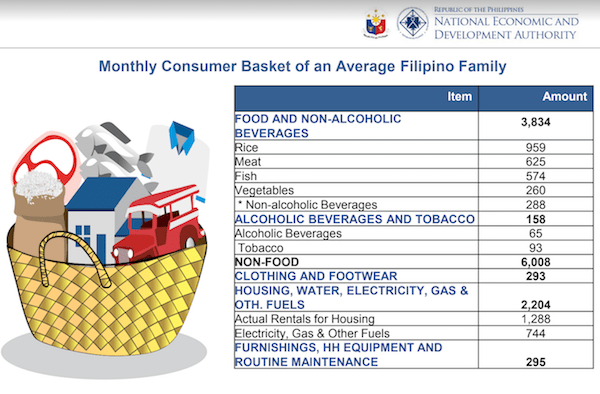 “Let’s say this is actually your average minimum wage worker with a monthly budget of P10,000, and this would be the breakdown of that budget based on the 2015 Family Income and Expenditure Survey,” Edillon said.

Edillon did not state in any part of the briefing that P10,000 was enough for a Filipino family to live a decent life.

Admittedly, however, Edillon missed the crucial points raised by reporters.

“In fact, by 2018, the poverty line could already have exceeded it. Hence, by any estimation, P10,000 really [is not] enough to live a comfortable or ‘decent’ life,” Punongbayan said in a Facebook post Wednesday.

The PSA report also noted that a family needs “an additional monthly income of P2,649…in order to move out of poverty in the first semester of 2015.”

Edillon said the family with a monthly budget of P10,000 belonged to the “5th decile” and was not considered poor because the “poverty line is low.”

The 2015 Family Income and Expenditure Survey is available on the Philippine Statistics Authority website. However, the range of household income for every decile is not specified in the report.