Jun 26, 2018 2:12 PM PHT
Rappler.com
Facebook Twitter Copy URL
Copied
The blog post uses a November 2016 news report that is unrelated to the murder. Authorities have not yet officially named any suspect in the case nor confirmed there is a video of the crime. 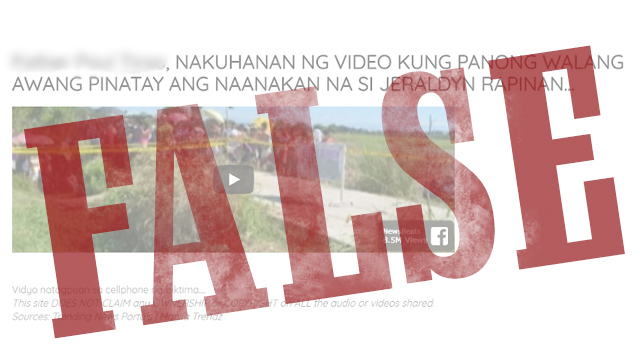 Claim: A Camarines Sur priest was captured on tape in the slay of 28-year-old woman Jeraldyn Rapiñan. Rapiñan, a resident of Baao in Camarines Sur, reportedly had a child with the priest.

The facts: The blog post embedded a video that is unrelated to the murder.

It is a November 23, 2016 TV5 Presinto Singko news report about an incest rape-murder case of a minor in Nueva Ecija. Only the first few seconds of the video is played, then a pop-up window within the video would appear, asking the user to share the video first to continue watching. When clicked, a Facebook share window shows “#EVILFATHER” automatically written in the caption. It also claims the post came from “RAPPIER,” seemingly a copycat of Rappler.

The investigation into the Camarines Sur murder is still ongoing. As of this posting, authorities have not yet officially named any suspect, nor reported there is a video documentation of the crime.

Rappler will not name any suspect or person of interest for the meantime, pending the police investigation.

On June 15, the body of Rapiñan was found in a grassy field along Maharlika Highway in San Fernando, Camarines Sur.

According to the report of Bicol Standard on June 18, which was also published in  the Philippine Star (Bicol Standard is Philippine Star‘s regional partner), Bicol Standard confirmed with St Bartholomew Parish Priest Father Louie Occiano in Baao that the unnamed person of interest is a priest from the same town. Occiano also declared this in his June 19 Facebook post.

In the news reports, the victim’s parents said Rapiñan and the priest had a child together, and she was supposed to meet him on June 15 to ask for financial assistance for their child’s baptism.

Occiano made it clear in his post that he is not involved in the crime.

The Bicol Standard and Philippine Star news reports didn’t name the person of interest. The latter report said that “the priest’s name is being withheld upon request while a thorough investigation is underway.”

Meanwhile, on June 19, a pro-Duterte “influencer” named the priest in a Facebook Live video. According to the vlogger, he supposedly got the information from his “friends in Bicol.” He also posted photos of the priest and Rapiñan, and sought justice for the victim in the post caption.

There are no official pronouncements yet from the police confirming that the priest is a person of interest. However, a June 22 GMA Balitang Pilipinas and Balitambayan report said Rapiñan’s parents point to him as the suspect.

The Archdiocese of Caceres has removed the priest as a parish priest in Iriga City  in line with the investigation, according to a June 23 GMA News report

The website the-fox-news.com is a bogus site mimicking Fox News. It does not have a home page. According to a social media traction measuring tool, the post was shared 9 times in September 2017, 11 months before the crime, by a now defunct Facebook account. (READ: 10 tips on how to spot fake news from Facebook)

Rappler has checked a death hoax involving actor John Lloyd Cruz, where the websites that carried this claim had a similar format to the-fox-news.com. – Miguel Imperial/Rappler.com