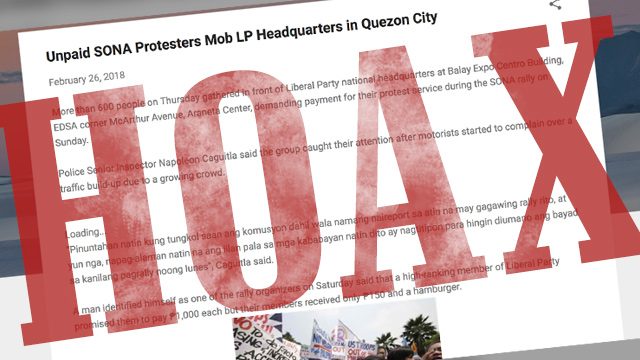 Claim: More than 600 protesters allegedly gathered outside Liberal Party (LP) headquarters at the Balay Centro Expo Building to demand the payment promised to them for attending the anti-government rally during President Rodrigo Duterte’s 3rd Stated of the Nation Address.

The gathering supposedly happened on Thursday, July 26, and contributed to traffic in the area. The headquarters is located in Araneta Center, Cubao, Quezon City.

The blog phnewspride.blogspot.com quoted a certain Police Senior Inspector Napoleon Caguitla, who said that the people flocked to the area to get the payment promised to them for rallying against Duterte on SONA day.

According to the blog post, one of the rally organizers said that a high-ranking LP official promised to pay them P1,000, but they only received P100 and a burger.

The same story appeared in the blog balitana.blogspot.com.

Facts: The blog post on phnewspride.blogspot.com is dated February 26, 2018, 4 months before the alleged gathering outside theLP headquarters.

According to Quezon City Police Department Public Relations Officer Police Senior Inspector Rohaina Asalan, the Cubao Police Station said that the incident did not happen. There are also no official reports of a gathering outside the Balay Centro Expo Building on July 26.

The photo used in the blog post was also used in an April 2014 article published on Daily Mail, which credited it to Associated Press.

The Daily Mail said that the photo was of demonstrators who gathered outside the US Embassy in Manila ahead of former US President Barack Obama’s visit to the country. They were protesting the increased US military presence in the country, as seen by their posters, which read, “US troops out of the Philippines” and “Obama, you’re not welcome in the Philippines.”