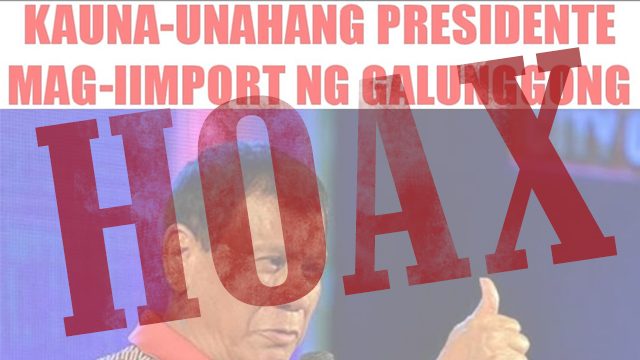 Facebook Twitter Copy URL
Copied
(UPDATED) The Philippines has been importing galunggong or round scad at least since 2001, according to data from the Philippine Statistics Authority

Claim: A photo that was posted on Facebook on Sunday, August 19, claimed that President Rodrigo Duterte is the first Philippine president to import round scad or galunggong.

The photo features the President, and the words, “Kauna-unahang presidente mag-iimport ng galunggong. Ayos ba mga bata?” (The first president to import galunggong. Is that good with you, kids?)

The photo has been shared more than 400 times as of posting.

Facts: Duterte is not the first Philippine president to import galunggong, but this is the first time that imported galunggong will go straight to wet markets, according to Bureau of Fisheries and Aquatic Resources Undersecretary Eduardo Gongona.

Data from the Philippine Statistics Authority (PSA) show galunggong was imported from China, Taiwan, Japan, South Korea, Thailand, the United States, and Vietnam from 2001 to 2016. Gongona said that these imports went to commercial and canning companies and restaurants.

Below is the total cost (in US dollars) of the Philippines’ galunggong imports over time, based on data from the PSA.

The amount of galunggong imported in 2016, however is highest that the country imported since 2001, as the data above indicates.

The increase in imports in 2016 was due to the $399,094 worth of galunggong that was imported from Vietnam from September to November 2016.

The rest of the $595,367 worth of galunggong imports in 2016 came from imports from China in January, July, and August.

The Department of Agriculture recently allowed the importation of galunggong to ensure “national food security,” according to a certificate released by the department. Rappler reported about the details of the importation. – Vernise L Tantuco, with reports from Ralf Rivas/Rappler.com

Editor’s note: The y-axis units in the graph in this article was previously stated in hundreds, not thousands. This has been corrected. We apologize for the error.