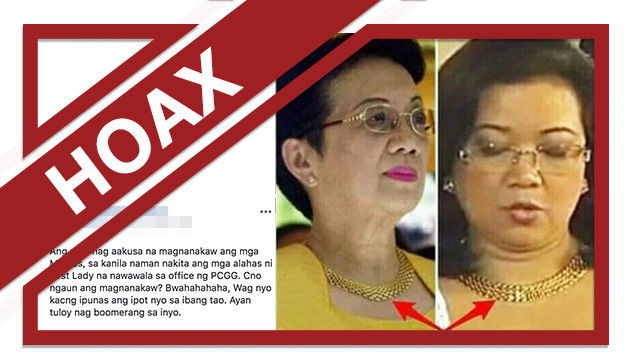 The photo shows Aquino and Sereno wearing what appears to be the same necklace.

(Those who are accusing the Marcoses of stealing can be seen wearing the jewelry of First Lady [Imelda Marcos], which are missing from the PCGG. Who is the thief now?)

The photo and its caption has more than 36,000 shares and more than 4,000 reactions as of posting.

Facts: In an email to Rappler, PCGG said that all of Marcos’ jewelry are in their custody, and are, stored in the Bangko Sentral ng Pilipinas (BSP), and were not worn by Aquino or Sereno.

Their statement read: “PCGG denies the claims that Cory Aquino and Maria Lourdes Sereno allegedly wore one of Imelda’s necklaces (posted on Facebook.com). The Marcos jewelry (Malacañang Collections, Roumeliotes Collections, Hawaii Collections) are all inventoried and accounted for. These are all kept in the vault of the Bangko Sentral ng Pilipinas.”

The Malacañang Collection were the pieces of jewelry found in the presidential palace following the People Power Revolution in 1986. The Roumeliotes Collection was seized from alleged Marcos crony Demetriou Roumeliotes when he tried to smuggle the jewelry out of the country.

Both of these collections have been with the BSP since 1986.

The Hawaii Collection was the jewelry that were seized from the Marcoses when they fled the Philippines for Hawaii in 1986. This was turned over by the US District Court of Hawaii to the Philippine government on December 18, 1992. (READ: SC affirms forfeiture of Imelda Marcos’ 3rd jewelry set)

The turnover was pursuant of the settlement agreement between Marcos and the PCGG. It was also by virtue of the “Conveyance, Grant and Bill of Sale” executed by Marcos in October 1991, which transferred the Marcoses’ rights, title, and interest in the items they brought with them to Hawaii to the PCGG.

According to the PCGG, the last time Marcos’ jewelry collection was taken out of the BSP vault was on November 23 to 27, 2015, when they were appraised by Christie’s and Sotheby’s. The appraisal was done in the BSP.

There was no exhibit and auction following the appraisal, but the disposition of Marcos’ jewelry is still part of the PCGG’s privatization plan.

The one of Aquino was taken in August 2003 by Joel Nito for Agence France-Presse (AFP). In it, she and then-president Gloria Macapagal Arroyo were leading a mass for the 20th death anniversary of Aquino’s late husband, former senator Ninoy Aquino. Aquino died on August 1, 2009.

The photo of Sereno was a screenshot from a video of her oath-taking as Supreme Court Associate Justice on August 16, 2010. – Vernise L Tantuco/Rappler.com