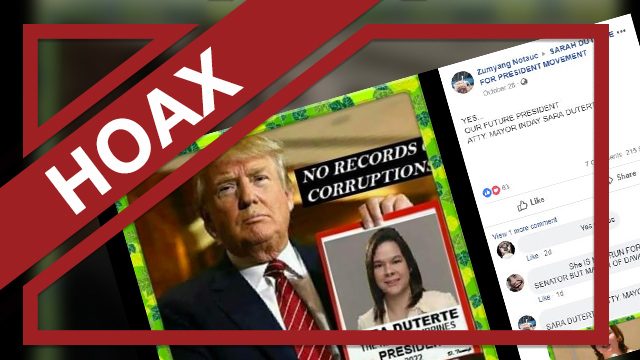 The sign that Trump is holding reads: “Sara Duterte, the next Philippines president 2022.” Above the sign is a cut-off phrase which includes the words “no records” and “corruption” that seem to pertain to Duterte.

The photo was posted on the Facebook group on Sunday, October 28, by user Zumyang Notauc. The photo has 229 shares as of posting.

Facts: The photo in the Facebook post is a manipulated version of a photo by Getty Images photographer Spencer Platt, which was taken in September 2015 in New York City.

In Platt’s original photo, Trump was holding up a pledge to support the Republican nominee in the 2016 US elections, not a sign supporting the Davao City mayor.

This was discovered through a reverse Google image search, which yielded a result that read “Donald Trump will not run as third-party candidate, signs RNC loyalty pledge.” After googling similar keywords and studying photos from the event, Rappler found the closest match to the shared photo was that of Platts’, shown below.

Sara Duterte is eyeing a mayoral seat* in the 2019 elections. She has not voiced out plans for running for president in 2022, though there are rumors that she plans to do so. Her father, current President Rodrigo Duterte, has also said that he wants her to follow in his footsteps.

Duterte has also been accused of corruption in the past, though she has never been arrested for the allegations. In February, Senator Antonio Trillanes IV filed for a Senate investigation into President Duterte and Sara Duterte’s supposed violations of the Anti-Money Laundering Act.

In May, the Commission on Audit (COA) questioned the Davao City local government’s irregular expenses. But Duterte said that those irregularities have already been addressed and resolved. – Vernise L Tantuco/Rappler.com

*Editor’s Note: An earlier version of this story mistakenly said Sara Duterte is eyeing a seat in the House of Representatives. This has been corrected. She is running for mayor.