Dec 7, 2018 12:13 PM PHT
Rappler.com
Facebook Twitter Copy URL
Copied
The Marcoses’ ill-gotten wealth has been proven in courts and the wealth recovered is accounted for by the PCGG 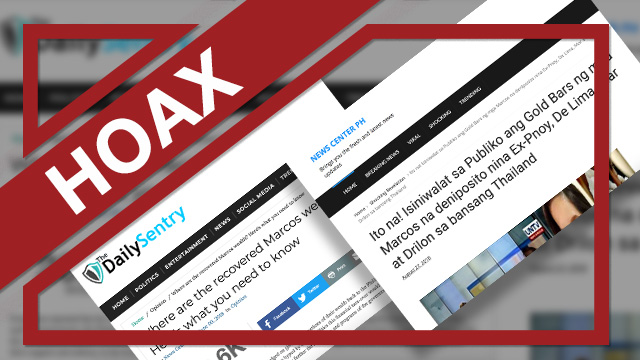 Claim: Two websites claim that the Marcoses’ loot, including their gold bars and Imelda’s jewelry, were taken by the Aquinos and other government officials.

The post contains a video news report wherein a certain Galma Arcilla, supposedly the director-general of a group calling itself the Transnational-Anti Organized Crime Intelligence Group (TAOC-IG), claimed to have authentic documents on an alleged shipment of $141 billion worth of gold to Thailand.

Alejandrino asked where the recovered loot and Imelda’s jewels went after Ferdinand Marcos was ousted.

Purugganan further claimed that Corazon Aquino created the PCGG to transfer the Marcoses’ wealth to her family.

Facts: The alleged gold bar shipment to Thailand had been debunked by news groups like Rappler, Manila Bulletin, and ABS-CBN in January 2017. Reports debunking the claim cited mismatched dates, wrong signatures, wrong Republic Acts, and wrong titles for the accused as proof that the document was a hoax. (READ: 5 reasons the gold shipment complaint vs Aquino is a joke)

Ill-gotten wealth recovered from the Marcoses is documented by the PCGG which was created on February 28, 1986 to recover the same from the Marcoses and their cronies. The blog posts did not present proof of the wealth that was allegedly transferred to the Aquinos.

The report also shows where this money went:

In September, the PCGG also told Rappler that all of Imelda’s jewelry are in their custody, stored in the BSP, and were not worn by Corazon Aquino or former chief justice Maria Lourdes Sereno.

“The Marcos jewelry (Malacañang Collections, Roumeliotes Collection, Hawaii Collections) are all inventoried and accounted for. These are all kept in the vault of the Bangko Sentral ng Pilipinas,” the PCGG said. (READ: The value of Marcos jewels according to the Philippine government)

The Malacañang Collection contains pieces of jewelry found in the presidential Palace following the People Power Revolution in 1986. The Roumeliotes Collection was seized from alleged Marcos crony Demetriou Roumeliotes when he tried to smuggle the jewelry out of the country. Both of these collections have been with the BSP since 1986. The Hawaii Collection was the jewelry seized from the Marcoses when they fled the Philippines for Hawaii in 1986. This was turned over by the US District Court of Hawaii to the Philippine government on December 18, 1992. (READ: SC affirms forfeiture of Imelda Marcos’ 3rd jewelry set) – Vernise L. Tantuco/Rappler.com *Based on December 6, 2018 exchange rates US$1 = P52.89