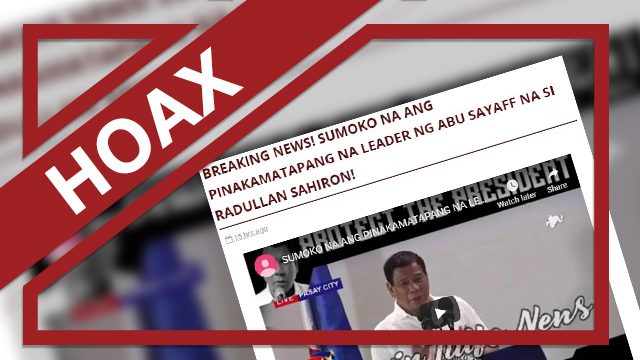 The blog ddsnewsinfo.xyz posted the claim on December 4.

The post has been shared 14 times on various Facebook pages and groups, with 1,047,694 followers combined. The shared posts had a total of 821 interactions.

The claim was flagged via CrowdTangle.

The facts: Sahiron has not surrendered yet.

The official Facebook page of Joint Task Force Sulu told Rappler via chat that the claim is “fake news.”

The blog ddsnewsinfo.xyz also did not cite its source for the claim. Aside from the title, the only content of the post is an embedded video from the YouTube channel “Timothy Peru” which was posted on May 26, 2017.

The video is a compilation of news reports of the People’s Television Network on the Abu Sayyaf and a speech of President Rodrigo Duterte during the launch of Cine Lokal on April 19, 2017. Below is the video of the full speech published on RTVM.

In his speech, Duterte did not mention Sahiron, but talked about terrorism and insurgency several times.

The military previously said Sahiron, one of the top leaders of the Abu Sayyaf in Sulu, sent surrender feelers in April 2017. But in December 2017, the military expressed doubts over his sincerity.

Sahiron is among the most wanted terrorists listed by the Federal Bureau of Investigation in the United States.

Meanwhile, the blog ddsnewsinfo.xyz is similar to other blogs Rappler has checked. It does not have article bylines, editorial staff, or contact details.

A whois query on icann.org indicates that the site was created just last November 22. Its first content was posted over a week later, on December 1. Since then, it has posted pro-administration and anti-opposition articles with sensational headlines. – Miguel Imperial/Rappler.com