HOAX: Ateneo to ‘delete all videos of bullying incident’

Dec 24, 2018 4:44 PM PHT
Rappler.com
Facebook Twitter Copy URL
Copied
The school has not publicized any plans to delete the videos of their former student bullying others 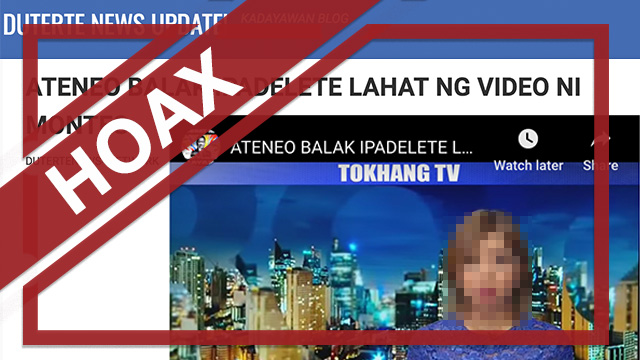 Claim: Ateneo Junior High School (AJHS) plans to delete all the videos of one of their former students bullying other kids.

This claim was made on a blog post on the site dutertenews4network.com on Friday, December 21.

The blog post does not have any explanatory text. It only contains a video, published on December 20, from the YouTube channel Tokhang TV.

Facts: The content of the video is an excerpt of a CNN Philippines live report. It begins by explaining the viral videos of the AJHS boy who was bullying other kids, then goes into the school vice principal’s statement about the incident.

There is no mention of Ateneo wanting the viral videos of the bully to be taken down.

A look through CNN Philippines’ videos on Facebook shows that the Tokhang TV’s 10-minute video was taken from their Thursday, December 20 reports.

Since the bullying videos went viral, Ateneo has investigated the incident and dismissed the bully in question.

Many false news reports about the incident have also spread. One claimed that Senator Risa Hontiveros defended the bully, saying he was “just practicing taekwondo.” Another claimed that a certain address was his.

The YouTube channel Tokhang TV is known for taking existing news reports and misleading the public with false video titles. Rappler has fact checked the following false claims from the channel: