Claim: Photos of a blue, garbage-free Manila Bay have been going viral on social media after the beginning of the clean-up drive on January 27, with some Facebook users already calling the bay a “resort” and “soon to be beach.” In a post showing photos of “tourists” flocking to and swimming in the bay, Facebook user Wilmie Ursal called Manila Bay a “resort.”

The photos have since been reposted in various popular travel Facebook groups such as Travel Philippines (Byaheng Budgetarian – Project 81) and SOLO Traveler Budgetarian, drawing thousands of reactions and shares.

Pages such as 911 Philippines Supporters also posted a supposedly clean Manila Bay claiming there will be a beach in the city soon. 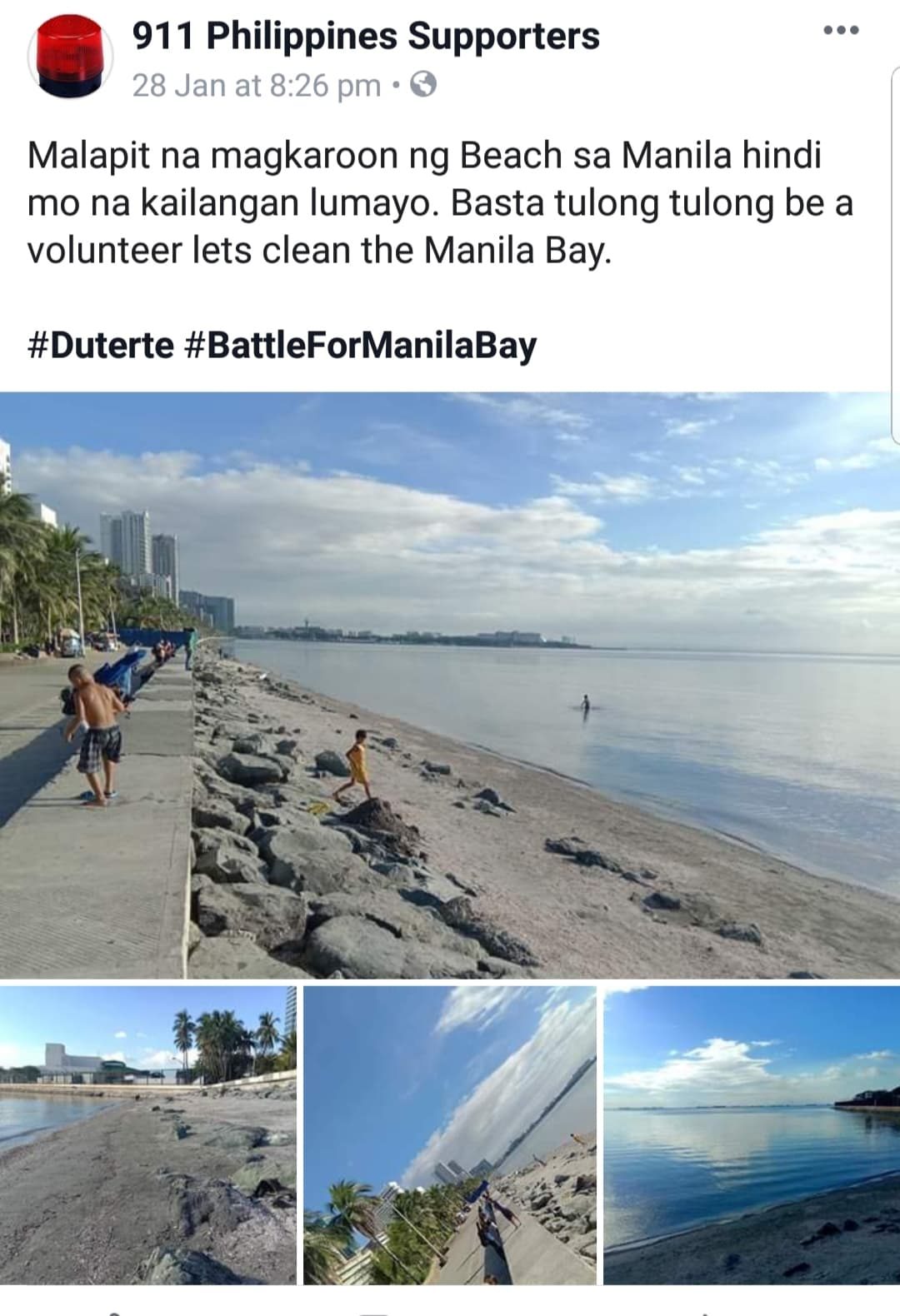 The facts: Manila Bay will not yet be safe for swimming until at least the next 7 years. Cleaning the bay requires years of interconnected solutions to a huge, complex environmental-metropolitan problem aside from the simple picking up of trash.

Along with solid waste management, the cleanliness of Manila Bay, as mandated by Operational Plan for the Manila Bay Coastal Strategy (OPMBCS), is determined through various clusters such as liquid waste management, percentage of informal settler families and illegal encroachments surrounding the bay, and the management of the bay’s habitats and resources.

This was taken into consideration by various government agencies, following the kickoff of the clean-up drive. The Department of Environment and Natural Resources with Secretary Roy Cimatu on February 6, for one, led the installation of a fence along the bay’s boardwalk to prevent locals from swimming.

The Department of Health warned the public on February 4 to wait for the results first of tests on the bay’s chemical and physical quality, as well as coliform levels.

The Department of the Interior and Local Government is yet to conduct an inventory of the informal settler families (ISFs) living along the bay where 80% to 85% of the trash found in the bay is alleged to come from.

Meanwhile, there are 17 principal river systems among the habitats the government still needs to take into consideration in the overall cleanup of the bay.

In her post, Wilmie Ursal claims she previously worked as a photojournalist, while 911 Philippines Supporters is a Facebook page which usually posts pro-Duterte views and memes. – Addie Pobre/ Rappler.com