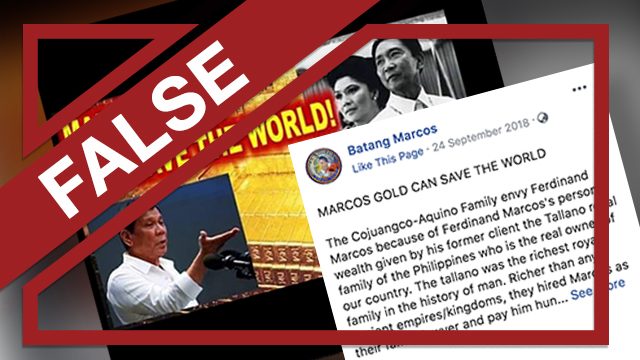 Facebook Twitter Copy URL
Copied
There are no records that show proof of a pre-colonial Filipino royal family that ruled over a kingdom called Maharlika, which was made up of the Philippines, Brunei, South Borneo, Hawaii, the Spratly Islands, and Sabah

Claim: A post on Facebook dated September 24, 2018 states that former president Ferdinand Marcos was paid in gold by the “Tallano royal family of the Philippines” for being their lawyer.

The so-called royal family, whose last name is Tallano, is said to have ruled over a kingdom called Maharlika that was made up of the Philippines, Brunei, South Borneo, Hawaii, the Spratly Islands, and Sabah before Spain colonized our country.

They allegedly “owned” our country until the mid-18th century.

Our national hero Jose Rizal was supposedly a direct descendant of the Tallano family.

The Tallanos was said to have paid Marcos “192 thousand tons of gold” because they hired him to be their lawyer before he became a politician.

The post has more than 79,000 shares and more than 5,000 comments as of posting. It was emailed to us to check through factcheck@rappler.com.

The Facts: There is no historical proof that a royal family called Tallano ruled over a kingdom called Maharlika during pre-colonial Philippines.

Rappler consulted historian and Assistant Professorial Lecturer of History at De La Salle University Xiao Chua, and he presented 5 questions in response to the post:

There are no land titles that prove that a Tallano family owns the entire Philippine archipelago.

According to Inquirer.net, Julian Tallano claimed that he was the heir Rajah Soliman and Lapu-Lapu and a descendant of King Luisong Tagean.

A report about the TRO published by the Philippine Star in 2002 says that Office of the Solicitor General filed a petition with the CA assailing the validity of the Pasay court’s ruling and the 3 fake titles that laid claim to the Philippines.

According to the Star, the petition explained that the “sheer area covered constitutes more than conclusive evidence regarding the spurious character of said titles…”

2. Is there a mention of the name Tallano in any documents from the Spanish regime? From the Blair and Robertson collection of documents? 3. Was there a historical document from Spanish period citing Maharlika as a place name in the Philippines?

The words “Tallano” and “Maharlika” are not mentioned in the Blair and Robertson collection collection of documents in relation to the name of a place or kingdom.

There are also no records that show that one family in the Philippines ruled over the other datus’ kingdoms on the archipelago.

In historian William Henry Scott’s Looking for the Prehispanic Filipino, published in 1992, he spoke about the 4 societal classes that existed during the pre-colonial era. He said that the Spaniards thought datus were kings – until they realized that they did not have power over other kingdoms or other datus.

The Marcos-approved history book Tadhana: The History of the Filipino People also says that by the time navigator Miguel Lopez de Legazpi set foot in the Philippines, the country’s many groups were not unified: “A pan-Filipino state however had yet to emerge, although in response to grave, strange, if exciting forces indigenous sates of varying sizes had emerged.”

4. If they were lawyered by Ferdinand Marcos and Jose W. Diokno, and if it was such a big case, was there a mention of the Tallanos in any of their writings, speeches, or credible biographies?

5. If it was such a big Supreme Court case, was there a SCRA or any documents to be found in the Supreme Court about an alleged decision?

A search for the name “Tallano” on the Supreme Court website, the LawPhil website, and the Chan Robles Virtual Law Library do not provide any decisions from before 1949 that involved both Tallano and Marcos. – Rappler.com