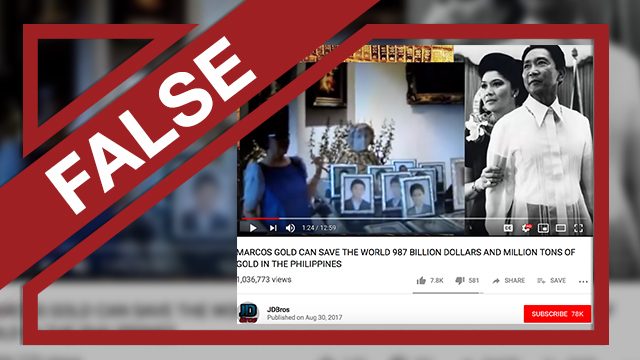 Facebook Twitter Copy URL
Copied
There is only an estimated 206,132 to 209,483 US tons of gold mined worldwide throughout history

Claim: A video on YouTube published by the channel JDBros claims that the Marcos family has a “million tons of gold.”

The video’s full title reads, “MARCOS GOLD CAN SAVE THE WORLD 987 BILLION DOLLARS AND MILLION TONS OF GOLD IN THE PHILIPPINES.”

The video itself is around 13 minutes long and features many different videos cut up and put together to seem like proof that the Marcoses own the gold referred to.

The video, which was published on August 30, 2017, has more than a million views as of this posting.

The facts: The claim is preposterous. It is impossible for anyone to own a million tons of gold.

Only an estimated 190,040 metric tons of gold has ever been mined worldwide throughout history, according to the World Gold Council, a market development organization for the gold industry. This is equivalent to 209,483.24 US tons.

This was the organization’s estimate as of 2017.

On the other hand, the US Geological Survey‘s (USGS) website says that there are 187,000 metric tons (or 206,132.21 US tons) of gold that have been historically produced.

Neither source estimates worldwide gold production to be in the millions. – Vernise L. Tantuco/Rappler.com