Feb 27, 2019 2:08 PM PHT
Rappler.com
Facebook Twitter Copy URL
Copied
Magdalo Representative Gary Alejano reiterates that the quote is false and is just propaganda. The claim had already been proven false and is being rehashed. 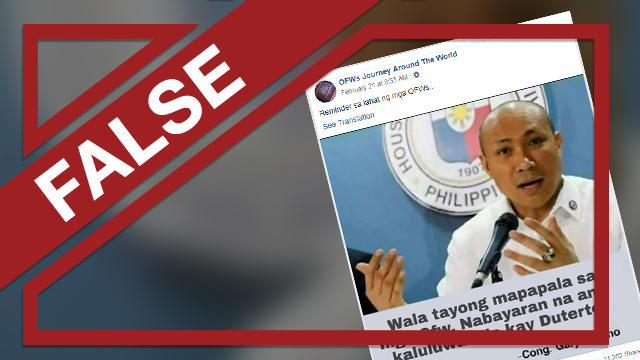 The Facebook community page OFWs Journey Around The World posted the claim on February 21, 2019.

Here’s a quotation from the page:

(We won’t get any benefits from OFWs. They have already sold their souls to Duterte).

As of posting, the engagement gradually increased to 1,618 reactions, 904 comments, and 10,875 shares. Rappler received the claim via email for fact-checking.

Alejano never made the statement. The claim was previously proven as false and is being rehashed.

The lawmaker reiterated to Rappler that the claim is “not true” and is just “propaganda.” He said in his Facebook post previously: “people who use negative propaganda to get even to political opponents are the ones making politics dirty.”

This is not the first time that Rappler spotted fabricated statements attributed to Alejano. On October 16, 2018, a Facebook page, Mga Balitang Pinas, posted a claim of the lawmaker’s supposed quote comparing himself to Bong Go.

Embedded in the article was also the quote on OFWs supposedly coming from the lawmaker. The quote is an old one and is being revived today by another pro-Duterte OFW page. There is no definite reason why the quote has resurfaced.

These are proven hoaxes.

Another invented quote of the lawmaker was also confirmed as false. In a Philippine Star article, Alejano cleared himself of the false claim which he supposedly made – that OFWs are burdens to be revisited as they have nothing to give in return.

In his tweet dated April 16, 2018, Alejano argued that the quote is only being used to divert the public’s attention from the pressing issue.

The supposed quote went viral a week after Alejano criticized President Rodrigo Duterte for his Hongkong “junket” on April 13, 2018. The photo used in this false claim was the same as the rehashed one.

Like Mga Balitang Pinas, the OFWs Journey Around The World did not provide any proof that the lawmaker said what was falsely attributed to him. Some commenters figured out that the claim could not be true and demanded the administrator of the page to give proof that Alejano indeed made the statement.

The Rappler fact-check team asked the OFWs Journey Around The World for the source of the quote they used in their post. A chatbot, however, replied that the page admin was on vacation. – Glenda Marie Castro/Rappler.com