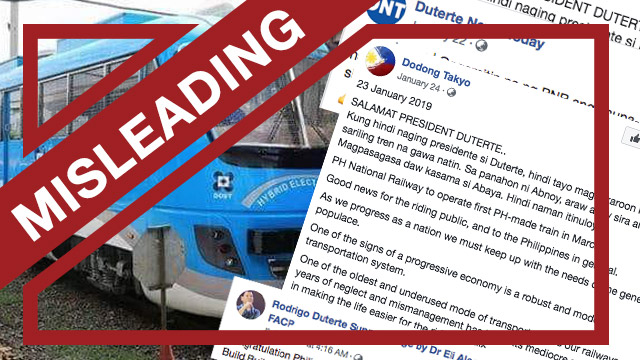 CLAIM: Filipino engineers were able to build a train only when Rodrigo Duterte became president.

Facebook page Dodong Takyo posted this claim on January 25, 2019, with a caption that reads: “Kung hindi naging presidente si Duterte, hindi tayo magkakaroon ng sariling tren na gawa natin.” (If Rodrigo Duterte did not become president, we would not have made our own train.)

The claim was emailed to Rappler for fact-checking.

The Facts:  Filipino engineers started developing trains in 2012, or 4 years before Duterte was elected president. The initiative was sustained by the Duterte administration.

A report on ABS-CBN’s news website says it took 5 years for the group of engineers and scientists in the Department of Science and Technology (DOST) Metals Industry Research and Development Center to fully develop the trains.

The hybrid electric train (HET) was first launched to the public in June 2016. Last March 1, the Philippine National Railways rolled out the first Filipino-built train. It can serve 650,000 commuters at a speed of 50 kilometers per hour.

In 2015, then-DOST secretary Mario Montejo also spearheaded a trial run of a hybrid electric road train (HERT) in Clark, Pampanga. A series of trials were made to test the roadworthiness of the 5-coach, fully-air conditioned train. (READ: Answer to transpo woes? Filipino-made hybrid road train launched).
In 2017, a locally-made road train finally hit the national highway of General Santos City.  In January 2019, the HERT was introduced in Cauayan City. – Glenda Marie Castro/Rappler.com