May 14, 2019 2:40 PM PHT
Facebook Twitter Copy URL
Copied
Under a Comelec resolution, 10 accredited major national parties will receive copies of election returns. The Liberal Party is among these parties. 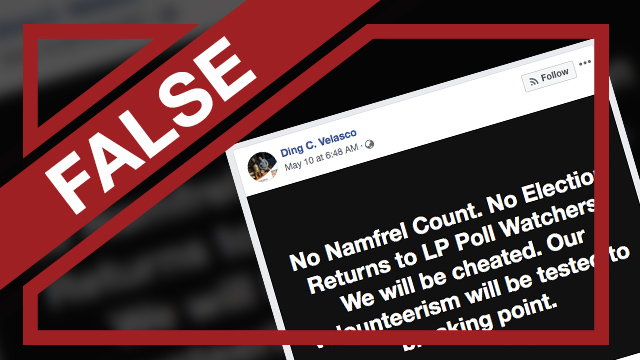 Claim: Facebook user Ding C. Velasco posted a Facebook status on Friday, May 10, claiming that Liberal Party (LP) poll watchers will not get copies of election returns (ERs) from the Commission on Elections (Comelec).

He also added a phrase that reads: “No Namfrel (National Citizens’ Movement for Free Elections) count.” 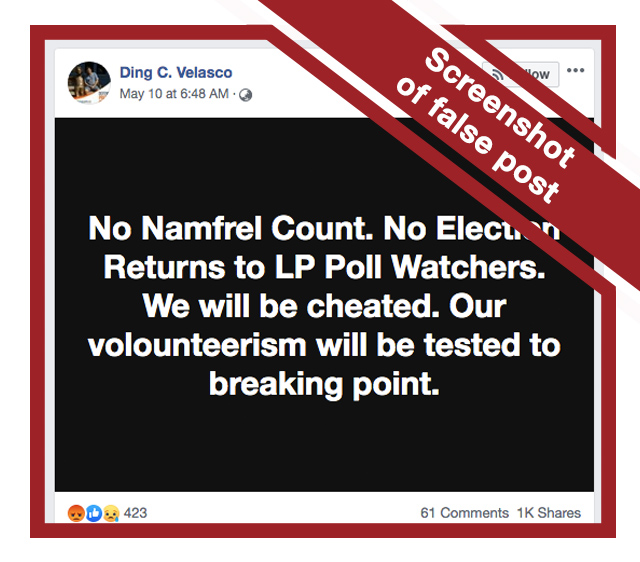 The facts: According to Article VII Section 28 of Comelec Resolution No. 10057, the Board of Election Inspectors shall provide copies of ERs to 10 accredited major national parties, allowing the LP to receive copies of these documents.

Also, it was confirmed through a tweet by former Comelec commissioner Gregorio Larrazabal that “major political parties, including LP, get one of the 22 copies.”

However, it is true that there will be “no Namfrel count” after the group rejected the Comelec’s accreditation to be the citizen arm for the 2019 polls.

Following the withdrawal, Namfrel secretary general Eric Alvia said in a press conference last May 3 that they “will withdraw from the random manual audit.”

The Comelec also provides ER copies to accredited citizens’ groups “for the conduct of citizens’ quick counts at the local or national level.” – Rappler.com

This fact check was written by the University of the Philippines Journalism Department. Rappler counter-checked their findings and changed their rating from misleading to false.

Rappler is a partner of Tsek.ph, a collaborative project between the academe and newsrooms to fight disinformation and misinformation during the 2019 Philippine elections. Tsek.ph fact checks claims made by candidates, false stories spread online, and submissions sent in by readers.