MISLEADING: Duterte did not pass any law when he was congressman

Mar 27, 2019 6:00 PM PHT
Rappler.com
Facebook Twitter Copy URL
Copied
One of the 11 bills that Duterte authored when he was congressman became law: Republic Act 8969, which makes the 3rd Friday of August a special holiday in Davao City 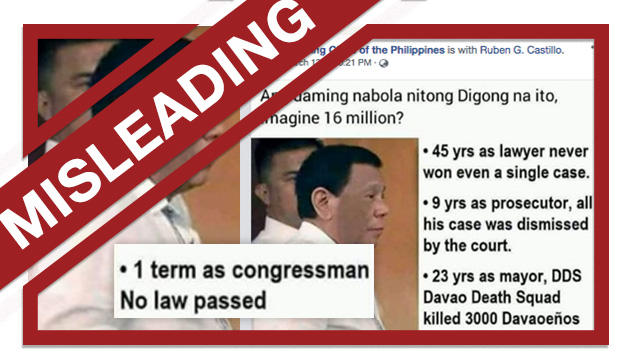 CLAIM: On March 13, 2019, Facebook page Thinking Class of the Philippines posted a list that supposedly showed how poorly President Rodrigo Duterte performed as a lawyer, prosecutor, congressman, and mayor of Davao City.

The post appears to echo a claim made by Twitter user @jedqcepe in a tweet dated September 15, 2018. Cepe claimed, among other things, that Duterte as a congressman “had no law passed.” 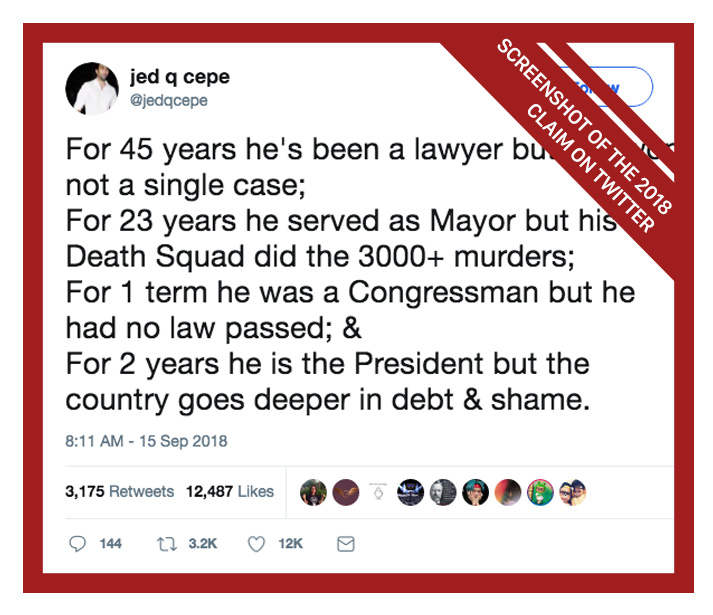 The claim was submitted for fact-checking as a private message to the Newsbreak Facebook page.

The Facts: One of the 11 bills that Duterte authored when he was Congressman became law.

Rappler’s 2016 research on his legislative track record shows that he authored 11 bills during his term, with only one being enacted into law: Republic Act 8969, which declared the 3rd Friday of August a special holiday in Davao City. (READ: How did Rodrigo Duterte fare as congressman?)

Below is the copy of the law:

Rappler asked Cepe on Facebook and Thinking Class of the Philippines page about the sources of their claims, but they have yet to reply. – Glenda Marie Castro/ Rappler.com