The post reads: “Julieta de Lima, wife of CPP Founder Jose Maria Sison. Julieta de Lima is sister of DOJ Leila de Lima. Until now, you do not know the Aquino’s Regime is run by Communist Party. You are blindfolded by a yellow ribbon. The root caused of Martial law.” 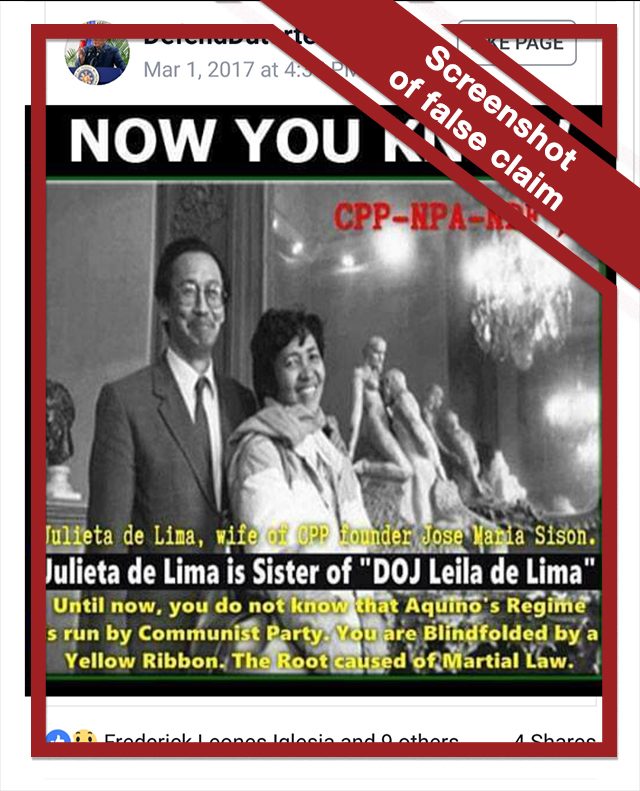 The claim has been circulating in Facebook since 2014. Facebook page Philippine Problems and Issues is among the first pages to circulate the claim. The Senator has long clarified that her family is not closely related to the family of Juliet de Lima, the correct name of Sison’s wife.

“Well if you’re asking about Juliet de Lima, the wife of Joma Sison, well I’ve never denied that. Many people know that the family of Juliet are our relatives,” De Lima said in an interview on ANC’s Top Story in July 2009.

“You see in our place, in Iriga City, all the De Limas there are our relatives. I even asked my father a few minutes ago, because I’m also not sure – I’m not sure as to the degree of the relationship – all I know is that [she is a] distant relative. And my father is also not very sure, [but] he said it is probably the third degree. Third cousin, they are third cousins. He is third cousins with Juliet and her siblings,” De Lima explained. – Addie Pobre/Rappler.com