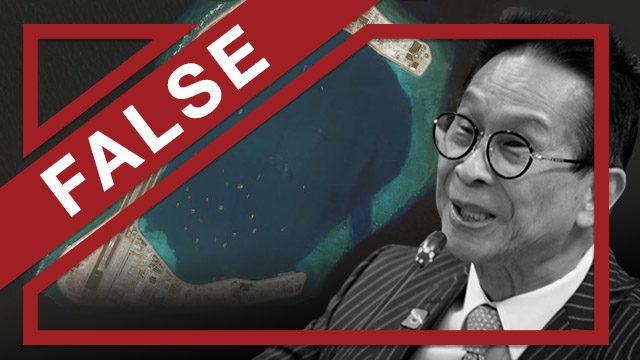 Claim: Presidential Spokesperson Salvador Panelo initially claimed that the Hague ruling won by the Philippines against China makes no mention of environmental destruction by China in the West Philippine Sea.

Told by a reporter that the historic 2016 ruling calls on China to account for the environmental damage caused by its island-building activities, Panelo responded: “No, the arbitral ruling is that atin ‘yun. Hindi sinasabi may destruction. Wala akong nabasa na may destruction.”

(No, the arbitral ruling says, that is ours. It doesn’t say there was destruction. I did not read anything about destruction.)

This exchange took place on Tuesday, April 2, during a Malacañang news briefing.

Panelo was being asked if the Duterte administration agrees with China Ambassador Zhao Jianhua that the claims in a complaint filed against Chinese President Xi Jinping before the International Criminal Court are “fabrications.” Among the charges against Xi is environmental destruction by China in the West Philippine Sea.

Aside from being spokesman, Panelo is chief presidential legal counsel, which makes him President Rodrigo Duterte’s legal adviser.

The Hague ruling is an important legal victory won by the Philippines in an international court and which Duterte himself recognizes as his “ace” against China when it comes to the West Philippine Sea dispute.

Panelo had to be informed by GMA News reporter Joseph Morong of the specific lines in the 501-page Hague decision that mention China’s destruction of the environment. Even then, the spokesman was not willing to say for certain that the lines read were indeed from the ruling.

“If that is the arbitral ruling, certainly that favors us,” he said.

Based on the lines read out by Morong, Panelo then said he does not share Zhao’s belief that China’s environmental destruction is a lie.

“If it refers to that then certainly I don’t believe in that,” he said.

The facts: The Hague ruling does mention China’s environmental destruction in the West Philippine Sea.

The historic document, dated July 12, 2016, even has a portion dedicated to “Harm on marine environment.”

It says there that China “caused severe harm to the coral reef environment and violated its obligation to preserve and protect fragile ecosystems.”

This is what that entire portion says:

The Tribunal considered the effect on the marine environment of China’s recent large-scale land reclamation and construction of artificial islands at seven features in the Spratly Islands and found that China had caused severe harm to the coral reef environment and violated its obligation to preserve and protect fragile ecosystems and the habitat of depleted, threatened, or endangered species. The Tribunal also found that Chinese authorities were aware that Chinese fishermen have harvested endangered sea turtles, coral, and giant clams on a substantial scale in the South China Sea (using methods that inflict severe damage on the coral reef environment) and had not fulfilled their obligations to stop such activities.