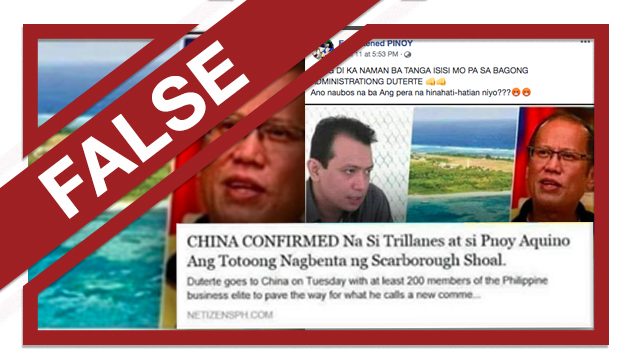 The screenshot shows that the website Netizensph.com is the source of the article.

The claim is rehashed.

In 2017, Facebook pages such as “We Support Pdu30 Administration” and “We Support Bongbong Marcos and Rody “Digong” Duterte Solid Group” linked their posts to dutertenewsph.com and pinoydailynews2016.blogspot.com. However, the article is no longer active.

Nonetheless, the article can still be read at testhuby.blogspot.com and newsevery7hours.blogspot.com.

The facts: There is no official confirmation from China that the Aquino administration sold Scarborough Shoal.

The Philippines filed an arbitration case against China before an arbitral tribunal at the Permanent Court of Arbitration in The Hague, Netherlands, in January 2013.

Three years after, the Permanent Court of Arbitration (PCA) announced that the Philippines won the case. (READ: 2012 YEARENDER: PH, China and Scarborough Shoal)

The ruling effectively declared Scarborough as a common fishing ground for both Chinese and Filipino fishermen.

A different version of the claim said Trillanes’ backchannel negotiations with China are an actual sell-off.

The Ombudsman, however, cleared Trillanes of treason and espionage charges, filed by President Rodrigo Duterte supporters, in 2017.

Apart from having a false headline, the rest of the story – which the blog said is sourced from Newstrendph – was actually plagiarized from an old Reuters report published in October 2016. The original headline of the story was: “Ahead of China visit, Philippine leader says no sense in war.”