Facebook Twitter Copy URL
Copied
The video is actually of Senator Leila de Lima celebrating her 56th birthday in August 2015 at the quadrangle of the Department of Justice, when she was still DOJ secretary
Claim: Facebook user Istong Macayana Palisoc claimed Senator Leila de Lima held a “party” at the New Bilibid Prison. In the public group Philippines Freedom Wall, Palisoc posted a video on April 13, 2019, where the senator is seen belting out the song “Bakit.” The video’s caption reads: “Ganito magpa-party ang isang DOJ secretary sa loob ng Bilibid. Gusto ‘nyo pa bang bumalik sila sa kapangyarihan?” (This is how a DOJ secretary holds a party inside Bilibid. Would you still like them to return to power?) 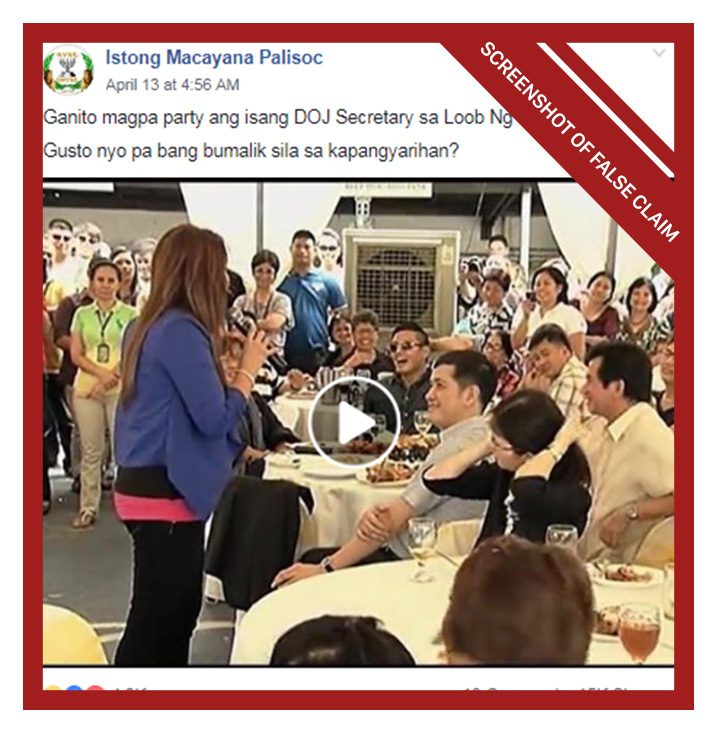 As of this writing, the post has gone viral with around 4,400 reactions and some 15,000 shares. The Philippines Freedom Wall group has over 1,400 members. Rating: FALSE The facts: The video is actually of De Lima celebrating her 56th birthday in August 2015 at the quadrangle of the Department of Justice (DOJ), when she was still justice secretary. De Lima’s office confirmed this in a press release which was posted on the Senate website in July 2016. At the time, the video was also used in the false claim that went viral on Facebook about the senator sitting with alleged drug lord Herbert Colangco. Facebook page Pilipinas Kong Mahal Tungo sa Pagbabago was among the pages that posted the claim in July 2016. As of this writing, the video from the page has around 2.1 million views. “The viral video showing Senator De Lima singing was actually taken during her own birthday party at the DOJ quadrangle last August 2015. The person who was claimed to be drug lord Colangco is really Congressman Alfred Vargas, who was one of the guests. Others who attended were emcee Imelda Papin, Usec Jovy Salazar (shown at the foreground of the video), and DOJ employees,” read the press release. Vargas confirmed he is indeed the man who was described to be Colangco in the viral video. “For the record, ako po talaga ‘yun. That time nandoon po ako at ako po ‘yung naka-shades, and kung bakit po ako naka-shades, may sore eyes po ako nung panahon na ‘yun,” he said in a DZMM phone interview in July 2016. (For the record, that was really me. That time I was there and I was the one wearing shades, and as to why I was wearing shades, I had sore eyes then.) De Lima had been accused of involvement in the New Bilibid Prison’s drug trade when she was justice chief. De Lima and former Bureau of Corrections officer-in-charge Rafael Ragos were said to have extorted money from inmates for her senatorial bid in 2016, a claim that the senator has denied. Philippines Freedom Wall describes itself as a group tackling “anything under the sun.” Members in the group appear to be from various political leanings, with some seemingly supporting the Duterte administration and others backing the opposition. Istong Macayana Palisoc, who reshared the false claim this April, is listed among the group’s administrators and moderators. Blog site Pinoy Tribune also claimed De Lima was partying inside Bilibid way back in 2016. A related false claim by pro-Duterte Facebook pages stemming from another video of De Lima singing “Careless Whisper” circulated in the same year. De Lima was arrested in February 2017 and continues to be detained over drug charges filed against her by the Duterte administration. She marked her second year in jail in February 2019. – Addie Pobre/Rappler.com Keep us aware of suspicious Facebook pages, groups, accounts, websites, articles, or photos in your network by contacting us at factcheck@rappler.com. Let us battle disinformation one Fact Check at a time.