FALSE: OFWs ‘receive’ money upon leaving, returning to the Philippines

Jul 3, 2019 10:08 AM PHT
Rappler.com
Facebook Twitter Copy URL
Copied
Overseas Filipino workers do not receive cash at the airport upon their departure and arrival 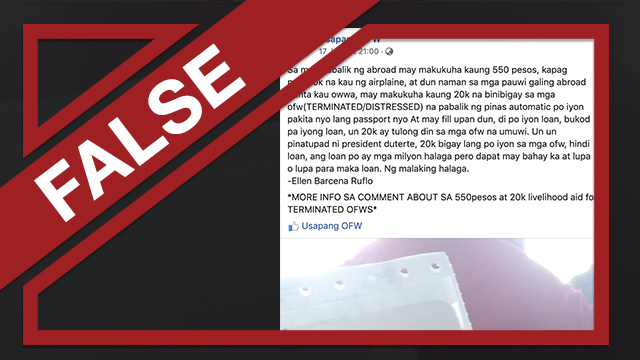 The post had an attached photo of a passenger holding a plane ticket and passport, together with P550.

Ruflo claimed that departing OFWs will receive P550 upon entering an airplane, while terminated or distressed OFWs returning to the country will receive P20,000 as livelihood aid from the OWWA. She said that the money can be claimed upon the presentation of a passport and completion of a form.

She added that people with a house and lot or who own land will be able to avail of a loan worth millions of pesos.

In the comments, Usapang OFW linked to articles about a terminal fee refund for OFWs and an OWWA program that provides P20,000 livelihood aid to terminated OFWs.

The post had 8,184 reactions, 14,552 shares, and 6,031 comments as of writing. This post was spotted through Facebook Claim Check, a tool that detects potential hoaxes on the social media platform.

The facts: Departing and arriving OFWs do not receive aid in cash at the airport.

On October 2014, the Department of Transportation and Communication implemented the International Passenger Service Charge (IPSC), also known as the airline terminal fee, which added an extra P550 to every airline ticket sold.

OFWs were eligible for an IPSC refund upon the presentation of their Overseas Employment Certificates (OECs) because of the Migrant Workers Act of 1995 (RA 8042), as amended by RA 10022.

Under this law, OFWs were exempted from paying any travel tax and airport fee with proof of entitlement from the Philippine Overseas Employment Administration (POEA).

In March 2017, the Department of Transportation-Manila International Airport Authority (MIAA), together with 40 airline companies, signed a Memorandum of Agreement (MoA) waiving the automatic collection of the IPSC at the Ninoy Aquino International Airport. The MoA was initiated to comply with President Duterte’s directive about a revised integration project for OFWs.

With regard to the P20,000 allegedly given to returning OFWs, a similar OWWA-led program, “Balik-Pinas! Balik Hanapbuhay!” was linked to the promised P20,000 for reintegrating OFWs. However, the aid that this program provides is non-cash assistance and is exclusively for OWWA members.

OWWA released a statement on May 6 on their official Facebook page denying the claim.