MISLEADING: Compared to Aquino, Duterte had a better approach to China MANILA, Philippines – Facebook page Crabbler posted a graphic on June 29 which has since gone viral, comparing the results of approaches to China of former president Benigno Aquino III and President Rodrigo Duterte.

In the graphic which carried the title, “Why Duterte is Correct in His Approach with China,” Aquino’s approaches to China had been supposedly detrimental to the Philippines due to the following effects:

Unlike Aquino, Duterte, however, had a better approach, resulting in the following: 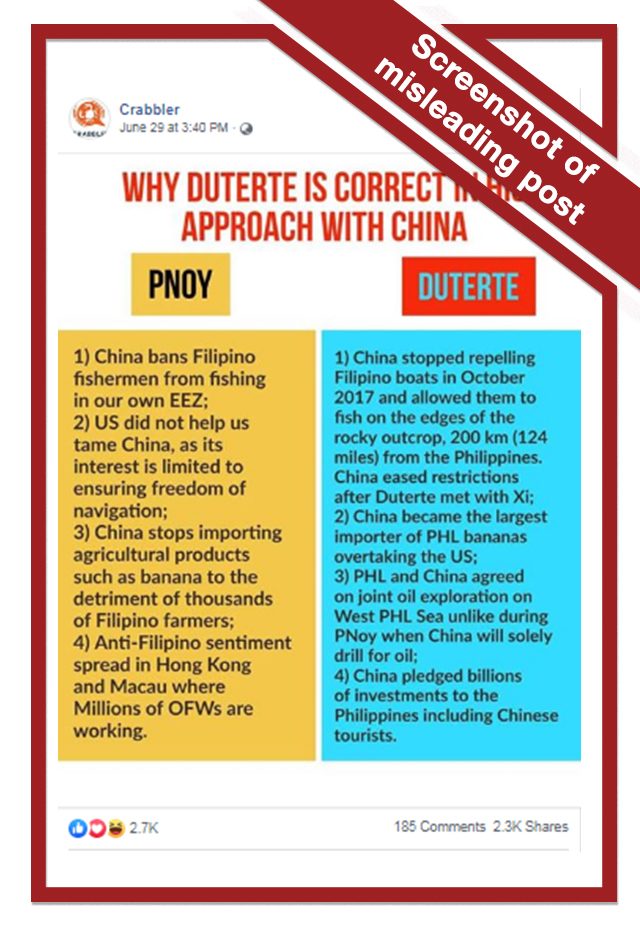 A reader e-mailed Crabbler’s post to Rappler’s fact checking unit for verification. Upon review of all claimed results placed under the two administrations, Rappler found at least half of them to be either misleading or outright false.

Claim 1:  Under Aquino, China bans Filipino fishermen from fishing in our own EEZ.

The facts: China has been imposing an annual fishing ban in the South China Sea since 1999. The fishing ban involves banning of Chinese and foreign fishing boats and lasts for a few months.

In 2012, during Aquino’s time and at the height of the Scarborough Shoal (Panatag Shoal) standoff, the Philippines welcomed but did not recognize the Chinese ban as portions of the ban “encompass” the Philippines’ EEZ.

The fishing ban is held every year “to promote the sustainable development of the fishing industry in the South China Sea and protect the fundamental interests of fishermen,” according to Chinese state news agency Xinhua.

It has been a contentious issue among Southeast Asian countries claiming territories in the South China Sea. The Philippines and Vietnam have been opposing the annual fishing ban from China as the annual ban is deemed a violation of their international law, sovereignty, and jurisdictional rights.

Claim 2: Under Aquino, the US did not help us tame China, as its interest is limited to ensuring freedom of navigation.

The facts: The US has not shown a proactive stance to defend the Philippines against China since the beginning of the Scarborough Shoal standoff until the end of Aquino’s term.

However, according to the book Rock Solid: How the Philippines Won Its Maritime Case against China, written by Rappler editor at large Marites Vitug, the neutrality of the US over the territorial dispute between its ally and China can be traced all the way back to 1995.

In 1995, China began occupying Mischief Reef (Panganiban Reef) that sits within the country’s 200-nautical-mile EEZ. Issues on whether the US should come to the rescue of the Philippines surfaced, when the Philippine Senate still had to debate whether Mischief Reef is part of the provisions covered by the Mutual Defense Treaty (MDT), signed by the two countries in 1951.

The MDT asserts the military alliance between the two countries, declaring that “an armed attack on either of the Parties is deemed to include an armed attack on the metropolitan territory of either of the Parties, or on the island territories under its jurisdiction in the Pacific Ocean, its armed forces, public vessels or aircraft in the Pacific.”

However, according to the late senator Blas Ople, chairman of the foreign relations committee back then, “over a period of time since World War II, the MDT had been tested and found wanting in terms of any war to our national security.”

Claim 3: Under Aquino, China stops importing agricultural products such as banana to the detriment of thousands of Filipino farmers.

The facts: China banned Philippine bananas in March 2012, a month before the Scarborough Shoal standoff between the Philippine Navy and the Chinese Navy. (READ: TIMELINE: Skirmishes, standoffs, harassment in West Philippine Sea).

However, the ban was eventually lifted 3 months later, in June of the same year, under “stringent measures and inspection.”

Claim 4: Under Duterte, the Philippines and China agreed on joint oil exploration in the West Philippine Sea unlike during PNoy when China will solely drill for oil.

The MOU only represents an agreement between the two countries to come up with deals on oil and gas exploration and exploitation. The MOU does not necessitate an immediate conduct of joint exploration. (READ: PH-China deal on oil, gas dev’t creates body to study joint exploration)

There was also no agreement under the Aquino administration for China to solely drill for oil in the West Philippine Sea. In fact, the Philippines was adamant about asserting its sovereignty against China after the latter, in March 2011, stopped a legitimate Philippine geological survey in Reed Bank (Recto Bank) studying potential oil and gas exploration in the area.

The developments surrounding this incident was documented by Vitug in her book Rock Solid: How the Philippines Won Its Maritime Case against China.

Facebook page Crabbler, which has been around since December 2013, posts mostly memes satirizing the opposition and appearing to support the Duterte administration. Its logo also seems to satirize that of Rappler, using an image, color, and a font style similar to ours. – Addie Pobre/Rappler.com