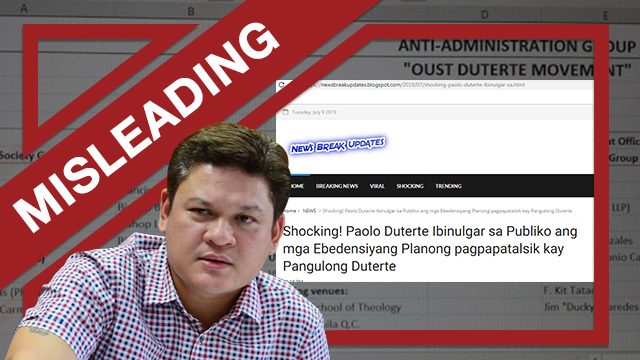 Claim: Davao City 1st District Representative Paolo Duterte “revealed” there is evidence that an anti-administration group is out to oust his father, President Rodrigo Duterte, from office.

The website newsbreakupdates.blogspot.com wrote this claim in an article published in July 2019 and was first shared on Facebook on July 5.

The presidential son, according to the article, posted on his Facebook page an Excel spreadsheet titled, “Anti-Administration Group, Oust Duterte movement,” which listed down those involved in the supposed plot. The post’s caption read: “Gisend ra ni sa akoa ha… Share lang nako kay para bibo….” (This was just sent to me ha… Sharing to show I’m alert.)

Religious personalities such as Bishop Broderick Pabilo, Bishop Leo Drona, and Bishop Antonio Tobias were also named. Jollibee Foods Corporation, Dole Philippines, and PLDT were the companies supposedly involved in the ouster, among others.

Completing the list are various civil society groups like the Opus Dei, and several Filipino journalists, including Rappler CEO Maria Ressa. The article concluded that Brigadier General Edgardo Arevalo confirmed the ouster will be moved to December, in line with the failure of the communist rebels’ “Red October” plan. (READ: 2018 blockbuster: Red October plot vs Duterte)

The articles shared in these groups have garnered a combined 849 reactions, 219 comments, and 504 shares.

The facts: Paolo indeed posted an Excel spreadsheet on his Facebook page on December 7, 2018 containing names of personalities and institutions allegedly planning to oust President Duterte. However, Department of National Defense (DND) Secretary Delfin Lorenzana and some of the persons named already dismissed the list as false. Two of the bishops included are also either retired or deceased.

Lorenzana, in response to Paolo’s claim, confirmed to reporters on December 11 that there was no such destabilization plot. “The first time I saw that posting, I said it’s fake news. I still maintain that it’s fake news,” he said. (READ: Paolo Duterte’s anti-administration list ‘fake news’ – Lorenzana)

The two bishops who are already retired and deceased are Bishop Leo Drona of San Pablo, Laguna and Bishop Julio Labayen of Infanta, Quezon Province, respectively. Drona retired from his post in January 2013, while Labayen died in April 2016, two months before President Rodrigo Duterte assumed office.

Vice President Robredo laughed off the accusations of Paolo and called him out for irresponsibly releasing information.

(It’s so irresponsible to post something that, firstly, has no basis. Second, I don’t know if he knows where it came from because obviously, whoever made the list did not even bother to do research.)

Paolo, in response to reactions elicited by his claim, said he only posted the Excel file containing names supposedly involved in the alleged ouster plot “for fun,” and that his critics should have read the caption of his post properly before getting angry.

The website Newsbreak Updates, according to Whois, was created in July 2000. Its articles are published with a disclaimer that says the website “cannot guarantee the legitimacy of some of the information contributed” to them.

The website Citizen Pinoy PH publishes articles mostly about Philippine politicians. Its navigation bar contains various subjects ranging from “world news” to “social media trending,” but the bar’s tabs do not lead to any landing page when clicked. No “about page” is also on the website. – Addie Pobre/Rappler.com