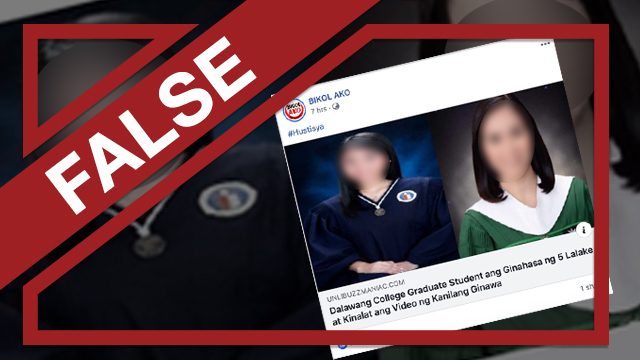 Facebook Twitter Copy URL
Copied
The women whose graduation photos are used are not the subjects of the news report embedded in the blog post. They also deny being raped.

The full title of the article shared on Facebook reads: “Dalawang college graduate student ang ginahasa ng 5 lalaki at kinalat ang video ng kanilang ginawa.” (Two college graduates are raped by 5 men who spread the video of what they did)

The claim was shared by Facebook user Ezekiel Geronimo to the page Kicks Universe Philippines, where he asked for help to catch the 5 men who allegedly raped his two cousins.

Like Geronimo, the actual blog post on unlibuzzmaniac.com encourages readers to watch the video and tells them that the police are looking for the suspects.

The actual blog post does not contain the photos of the two women.

The blog post was also shared on the page BIKOL AKO and to groups like Philippines Mountain Climbers, Yamaha Sniper Classic, MX 135, MX King 150i Owner’s, and BENTAHAN NG MOTOR – METRO MANILA. The posts on the 3 groups have since been taken down.

According to Claim Check, Facebook’s tool for identifying possibly misleading trending content, the blog post was first shared on the social media platform on Thursday, July 4. The actual blog post says it was “published today” regardless of the date the post was visited.

The facts: The women whose graduation photos were used in the post were not the subjects of the GMA News report embedded in the blog post. They also deny ever being raped.

The GMA News video was published in September 4, 2015 and reported on two minors from Cabuyao, Laguna who were raped by 5 men. The report said that two of the men were already under inquest, while the other 3, who were minors, were turned over to the Department of Social Welfare and Development.

The two women whose photos were used in the Facebook posts have also denied the claim.

The graduate from ADMU posted on Facebook on July 5 telling her friends “it’s not real, don’t worry.”

On July 9, Rappler reached out to the graduate from FEU, who said she was “never raped” and called the post “garbage.”

The website unlibuzzmaniac.com does not have any other recorded posts that can be found through the links it provides for navigation. However, a Google search and a search on Claim Check of the domain shows other articles from the site about alleged sex scandals, along with a list of domains that are registered to the same IP address.