FALSE: Palparan innocent over 2006 abduction of 2 missing UP students 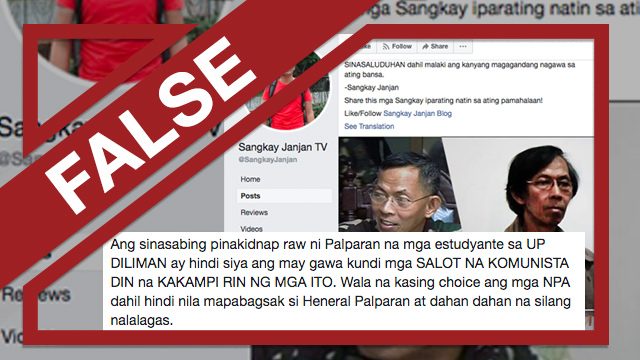 Claim: Retired Army Major General Jovito Palparan did not abduct University of the Philippines (UP) students-activists but the New People’s Army (NPA) did.

A lengthy post on Facebook urged President Rodrigo Duterte to free Palparan. The post contained many claims, particularly the justification for Palparan’s going after communist rebels in the country.

It also included many empty praises for the retired general’s bravery in targeting and attacking the supposed enemies of the State.

(Palparan did not kidnap UP Diliman students as claimed. It’s the plague of communists, who are also their comrades, behind this. The NPAs have no choice because they could not get rid of General Palparan, and their ranks are thinning.)

The claim was originally posted by Facebook page Sangkay Janjan TV on October 2018. It was recently posted again – as spotted via tool CrowdTangle – by Facebook group President Rody Duterte-Federal Movement International on July 31. Sangkay Janjan TV’s post has since been widely shared over 105,400 times with 63,000 reactions and 12,000 comments.

The facts: Palparan was found guilty over the kidnapping and serious illegal detention of two missing UP students Karen Empeño and Sherlyn Cadapan in 2006. The Malolos Regional Trial Court (RTC) handed down the guilty verdict on September 17, 2018. (READ: People of the Philippines vs Jovito Palparan)

The testimony of several eyewitnesses strengthened the evidence to warrant the conviction of the retired general. Aside from Palparan, Lieutenant Colonel Felipe Anotado and S/Sgt Edgardo Osorio were also indicted by the court.

On June 26, 2006, Cadapan and Empeño went missing in Hagonoy, Bulacan. During that time, they were UP students who were accused of being members of the Community Party of the Philippines (CPP).

In December 2011, the Department of Justice (DOJ) found probable cause to charge Palparan, Anotado, and Osario with kidnapping and serious illegal detention. The Malolos RTC ordered Palparan’s arrest the same year. He went into hiding until he was arrested in Sta Mesa, Manila on August 12, 2014. (TIMELINE: The search for Jovito Palparan)

The page which claimed Palparan was innocent did not provide strong proof that the NPA, or the communists, were the ones who abducted the UP students.

In its “About” section, Facebook page Sangkay Janjan TV said that its posts are “more on ‘opinion’ [since] we have freedom of speech in our country so I am free to express my own opinion here.” Meanwhile, the Facebook page President Rody Duterte-Federal Movement International is under Rappler’s watchlist of Facebook pages that spread false information on social media. – Glenda Marie Castro/ Rappler.com