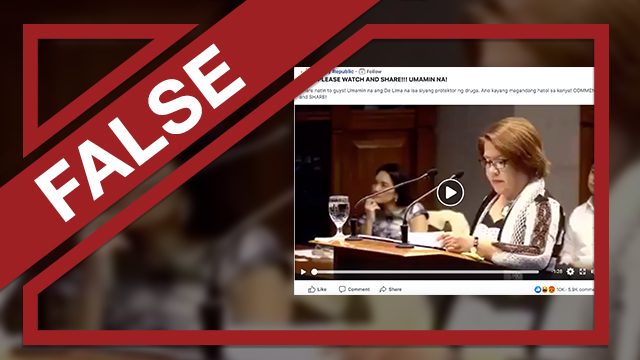 Facebook Twitter Copy URL
Copied
The senator's privilege speech on extrajudicial killings delivered in 2016 was cut, split, and spliced in the video

The video is being circulated again on Facebook despite being posted 3 years ago. It was flagged by Claim Check, Facebook’s tool that identifies dubious posts for fact-checking.

The facts: The video posted by Pinoy Republic is an edited version of De Lima’s privilege speech on extrajudicial killings at the Senate on August 2, 2016. Her whole speech lasted for 38 minutes and 46 seconds.

The video posted by Pinoy Republic omitted key parts of De Lima’s speech and arranged it in such a way that it presents a whole new narrative.

In her privilege speech, De Lima criticized the rise of extrajudicial killings under President Rodrigo Duterte’s administration that resulted from his bloody war on drugs.

At the same time, the senator also praised the President for his “determination” in eradicating the drug problem in the country. She said that she also spearheaded the operations to clean up the New Bilibid Prison of drugs. (READ: Bilibid probe: Why did drugs proliferate behind bars?)

Rappler compared Pinoy Republic’s video to the original footage of De Lima’s speech. The text in bold are the parts of the original video that were deliberately cut out:

De Lima also denied the claim in a statement sent to the press on Saturday, August 17. She said: “Hindi po ako drug lord. Hindi po ako protektor ng drug lord (I am not a drug lord. I am not a protector of drug lords). No fake news or perjured testimonies can ever obliterate the truth about my innocence.”

On February 24, 2017, De Lima was arrested over drug charges filed against her by the Department of Justice (DOJ).

After more than two years of being detained, she was granted a two-day furlough from August 14 to August 16 to visit her ailing mother in Iriga City. – Pauline Macaraeg/Rappler.com