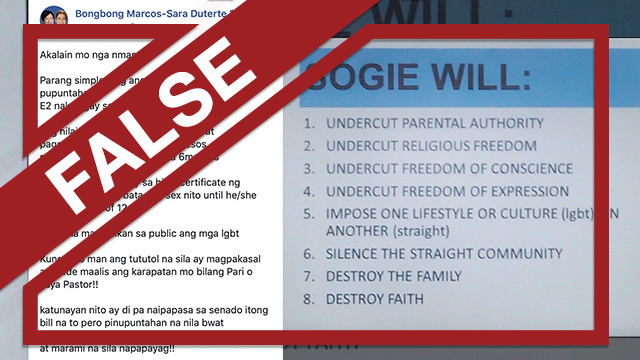 Facebook page Bongbong Marcos-Sara Duterte 2022 made these claims in a post on August 30. It was accompanied by a photo, which said that the SOGIE equality bill will “undercut” parental authority, religious freedom, freedom of conscience, and freedom of expression. It will also impose the lifestyle of LGBTQ+ on straight people and silence the “straight community,” the post read. 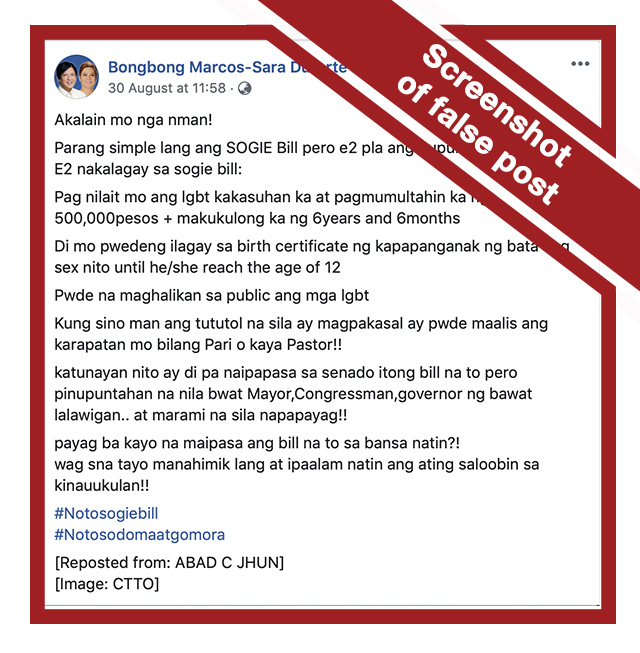 Bongbong Marcos-Sara Duterte 2022’s post was shared over 15,000 times on Facebook. It also garnered over 5,700 reactions and 5,200 comments as of writing and was flagged by Facebook Claim check, the social media network’s tool that identifies suspicious posts.

The page credited a certain Facebook user Abad C Jhun as its source. Abad C Jhun posted the same content on his timeline on August 28, but it did not receive any engagements.

The facts: The SOGIE equality bill is an anti-discrimination bill that prohibits unfair treatment on the basis of a person’s sexual orientation, gender identity, and expression. There are 4 versions of the bill in the Senate, but none of them demand the things enumerated in the Facebook posts. (READ: EXPLAINER: What you need to know about SOGIE)

The Senate version, on the other hand, did not even make it past 2nd reading in the 17th Congress. (READ: TIMELINE: SOGIE equality in the Philippines)

There are no provisions in the bills that say assigning sex to newborns can be penalized, or that same-sex marriage is now allowed. Insulting members of the LGBTQ+ will also not result in penalties unless they are made to ridicule and harass a person because of their SOGIE.

What the bills propose, rather, is the equal access of the LGBTQ+ to basic rights and services. It proposes the prohibition of the following discriminatory acts if made on the basis of SOGIE:

Penalties for those who commit any of the acts mentioned above range from not less than P100,000 to P500,000 and/or imprisonment of not less than 6 months to 12 years maximum, depending on the offense committed.

Senator Risa Hontiveros, one of the authors of the bill, also tweeted on August 28 to clarify the misconceptions surrounding it.