Facebook Twitter Copy URL
Copied
Revilla did not propose to make Culion Island in Palawan the next Bilibid prison. The photo of the Manila Bulletin frontpage has been manipulated.

The Facebook page TRAPOlitics posted on September 10 a purported Manila Bulletin front page with a headline that reads, “Revilla eyes Culion, Palawan for the next Bilibid prison.”

In its caption, the page claimed that the senator supposedly made this proposal during the Senate blue ribbon committee hearing on the Good Conduct Time Allowance (GCTA) law.

(The Bilibid is too congested. I suggest we transfer it to Palawan. Culion island used to be an exile colony. It would be a good place to transfer prisoners. It’s the Alcatraz of the Philippines.) 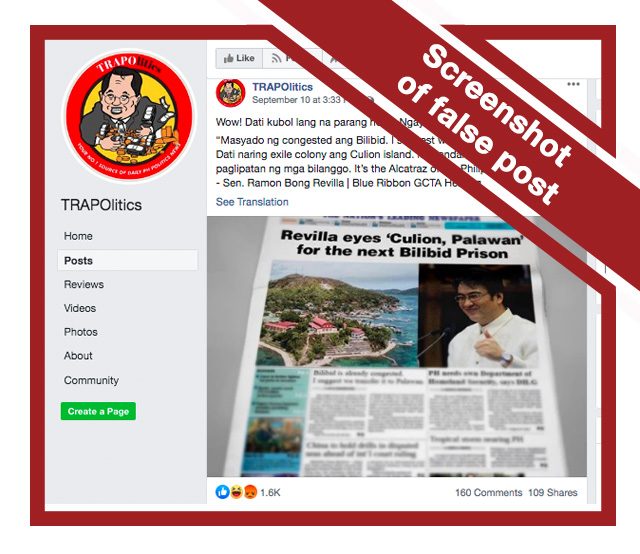 The Facebook post did not specify when the supposed Manila Bulletin headline was released. Apart from the headline and the main photos, the rest of the page was blurred.

The claim was sent to Rappler through email for a fact check. The post garnered combined reactions, comments, and shares of over 1,880.

The facts: Revilla did not propose to make Culion Island in Palawan the next Bilibid prison. The photo of the Manila Bulletin frontpage in the post was manipulated to include Revilla’s photo, a photo of Culion Island, and a fictitious headline.

While he spoke and asked questions during the hearing, Revilla did not mention anything about a supposed proposal for a high maximum prison in the island of Palawan.

Instead, he grilled Bureau of Corrections (BuCOr) Chief Nicanor Faeldon over the photo of Sanchez which went viral following reports of his release. The photo, which included Sanchez and his daughter Councilor Ave Marie Tonee “Amty” Sanchez-Alcid, was supposedly taken in a hospital facility outside the prison.

The Manila Bulletin confirmed with Rappler that they did not publish a story with the headline as claimed.

By searching through manilabulletin.pressreader.com – the digital edition of Manila Bulletin – Rappler found what appears to be the issue that had some stories and photos similar to the ones in the TRAPOlitics post. Released on July 4, 2016, this issue contained the following stories and features similar to the headlines blurred in the manipulated photo:

The image below shows a side-by-side comparison of the real front page vs the one in the digitally-manipulated photo: The blurred headline below Revilla’s picture, which reads, “PH needs own Department of Homeland security, says DILG,” was an ABS-CBN article published on September 9, 2019. A Google search yielded no results for the headline of the article at the center, which reads: “Bilibid is already congested I suggest we transfer it to Palawan.”

The idea of having an island prison is not new. In 2016, Senator Tito Sotto proposed a secluded prison in Palawan for convicted drug criminals. The idea resurfaced after Senator Miguel Zubiri filed a bill seeking to establish a special prison facility for those convicted of heinous crimes.

Senate Bill No. 1004, which proposes the creation of a heinous crimes penitentiary – preferably in an island to prevent the prisoners from escaping or from having unwarranted communication outside – does not specify which island should be used. (READ: Zubiri wants Alcatraz-type ‘heinous crime penitentiary’)

The bill was filed in the wake of heated discussions on the botched release of rape and murder convict Antonio Sanchez. – Glenda Marie Castro/Rappler.com