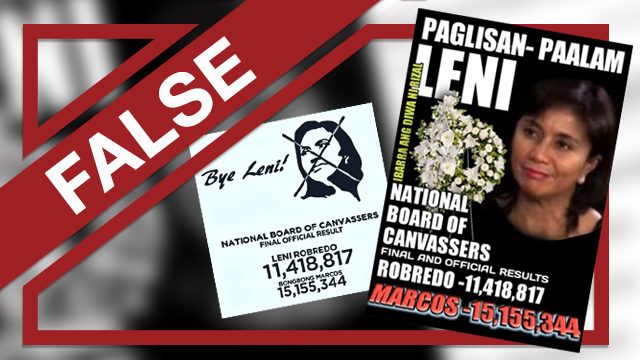 Facebook Twitter Copy URL
Copied
As of posting, there are no official figures from the Presidential Electoral Tribunal, which has yet to decide on whether or not to proceed with the rest of the recount prompted by the Bongbong Marcos election protest

At least two graphics cards cited figures from a supposed “National Board of Canvassers,” saying Robredo received only 11,418,817 in the vice presidential race, while her opponent former senator Ferdinand “Bongbong” Marcos Jr got 15,155,344 votes.

Versions of these cards were posted on September 18, 2019 by the Facebook accounts of Jesus Perpetuo Soguilon Daguno Jr and Herbert Florida. As of this writing, Daguno’s post has been shared over 25,000 times, and has received 3,500 likes and 2,100 comments. Florida’s post got at least 2,900 shares, 557 likes, and 209 comments so far. The facts: The numbers on the rehashed graphics are fabricated and have no basis. There are also no official figures yet from the ongoing election protest concerning the 2016 vice presidential race at the Presidential Electoral Tribunal (PET).

These repeated claims resurfaced days after it was reported on September 10 that Supreme Court Associate Justice Alfredo Benjamin Caguioa, member in charge of Marcos’ electoral protest, had submitted a report to the PET on the results of the first stage of the recount. However, no further details like revised vote counts were disclosed.

The PET also has yet to decide on whether or not to proceed with the rest of the recount, as the Marcos camp has to prove its case first in its 3 pilot provinces in the recount’s first stage. The Supreme Court sits as the PET to decide on election protests in presidential and vice presidential races. (READ: Presidential Electoral Tribunal: What happens to a protest?)

In April 2019, Agence France-Presse had marked these claims on the vice presidential elections and subsequent recount as false.

Rappler has fact-checked similar claims on supposed results of the vice presidential race and recount at least twice before. In May 2018, Rappler rated as false the claims in some dubious websites saying Marcos had won the recount. Then, in April 2019, it debunked the opposite claim, that Marcos had lost. – Rappler.com