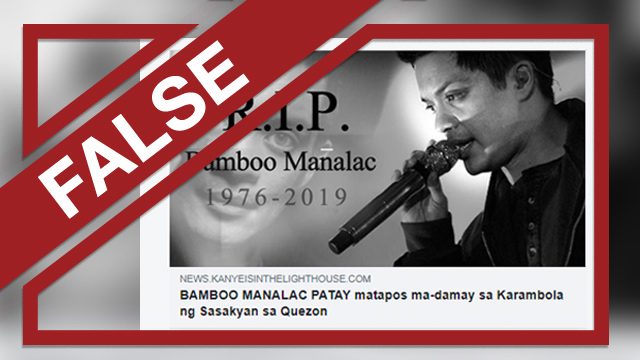 The thumbnail in the video shows an image of the singer with a text overlay that reads: “RIP Bamboo Manalac 1976 – 2019.”

When the video is clicked, it redirects to websites latestnewstv.info and nationalistanews.info. On these websites, the original news report from ABS-CBN can be found, but the video caption still retained the claim.

A warning message in the video says that it must be shared first before viewers can watch it fully.

The websites news.kanyeisinthelighthouse.com and ang.balitangtv.info have also posted the claim. A reader emailed the claim to Rappler for fact checking. Facebook’s fact checking tool Claim Check showed that the post was first shared on the platform on September 27. It has been posted 134 times on Facebook, accumulating total reactions, comments, and shares of over 6,000.

The facts: Mañalac is still alive. No report from any credible news site was released about the car accident he was supposedly in.

The singer’s latest social media activities show that he is preparing for an upcoming concert tour in Australia from October 11 to 13. There is an Instagram post dated September 30 of a poster for his concert.

The video used in the claim is an ABS-CBN News report uploaded to its official YouTube channel on February 16, 2019. It contained a 51-second flash report about the collision of bus, van, and AUV in Lopez, Quezon which left 3 dead and 7 injured. Mañalac was not mentioned in this video.

The official website of music TV channel MYX also posted an article saying that Mañalac was a victim of a death hoax.

The website news.kanyeisinthelighthouse.com has been previously fact-checked for posting a death hoax of late veteran actor Eddie Garcia before he passed away.

Some celebrities have also fallen victims to this kind of false claim, including Gary Valenciano and John Lloyd Cruz.

The websites, which posted the claim, have a disclaimer that says, “This site does not claim any ownership or copyright on all the audio or videos shared.” The site latestnewstv.info also mentioned a list of their unverified sources which are Trending Portalz, Manila Portalz, Trendz, and Filipino Balita Portaz. – Glenda Marie Castro/Rappler.com