Oct 4, 2019 7:55 PM PHT
Rappler.com
Facebook Twitter Copy URL
Copied
This is a rehashed claim, based on an order from the Presidential Electoral Tribunal in June 2018 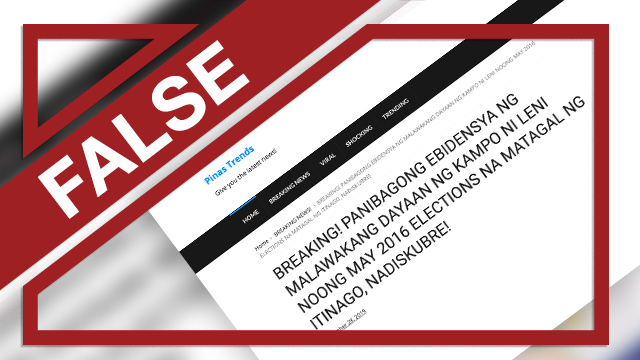 Claim: New evidence of “widespread cheating” has been reported against Vice President Leni Robredo in the ongoing electoral protest questioning the results of the 2016 vice presidential elections.

The article featured a post from Facebook user Anthony Sumagui to support its claim. Sumagui cited a supposed resolution from the Presidential Electoral Tribunal (PET) ordering municipal treasurers and election officers in some towns in Camarines Sur – Robredo’s home province – to explain issues or irregularities found in election paraphernalia.

According to online tool Crowdtangle, the article has been shared at least 1,652 times after being posted by Facebook pages supportive of Ferdinand Marcos Jr – who filed the election protest against Robredo – and presidential daughter Sara Duterte, like Sara Duterte for President 2022 Elections, Marcos Loyalist, and Duterte Marcos Supporters.

The facts: The said evidence is not new. It has been reported over a year ago, in mid-2018.

The PET resolution indeed made the resolution, as reported by Rappler on July 5, 2018. The PET resolution was dated June 19, 2018, and concerned municipal treasurers and chairmen of the board of election inspectors (BEI) from Iriga City, Tinambac, and Tigaon.

A separate resolution on April 24, 2018, ordered municipal treasurers in 4 other Camarines Sur towns to explain the issue of “wet ballots.” This was also reported in Manila Bulletin in May 2018, and mentioned in Rappler’s July 2018 report.

Since then, however, there has been no ruling yet on whether these issues or irregularities constitute cheating, because PET proceedings are confidential in nature.

The PET has also not issued a decision, as of writing, on the first stage of the 2016 vice presidential vote recount, which is part of Marcos’ election protest against Robredo. The Supreme Court, sitting as the PET, scheduled for October 8 a new round of deliberations. (READ: Justice Caguioa finished with report on pilot recount in Marcos poll protest)

In addition, below the full text of Sumagui’s featured Facebook post in the article was only a screenshot of his July 31, 2018, post, not an embed, which would have reflected the timestamp of his post.

Similar claims on the 2016 VP election protest have popped up in recent months, like a false, rehashed claim on the “final, official” vote count, and a false claim on a PET ad hoc committee “confirming” cheating allegations in the provinces covered by the initial recount. – Rappler.com