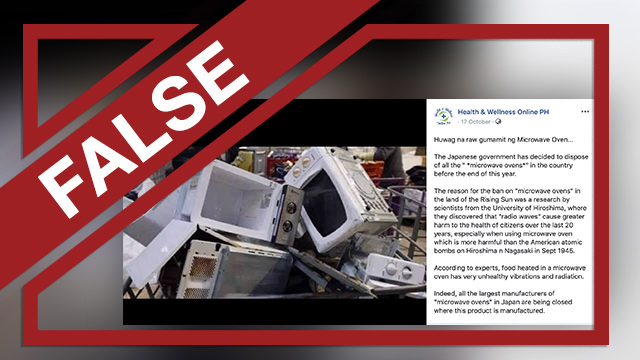 Claim: The Japanese government is banning microwave ovens “before the end of this year” due to the potential harm of radio waves to humans.

A post by Facebook page Health & Wellness Online PH said the reason behind the ban was a research by University of Hiroshima scientists that showed radio waves “cause greater harm to the health of citizens over the last 20 years.”

The post also claimed that using microwave ovens is “more harmful than the American atomic bombs on Hiroshima and Nagasaki in Sept 1945,” and that food heated in a microwave oven has “very unhealthy vibrations and radiation, according to experts.”

The page posted this claim on October 17 and was flagged by Facebook Claim Check, the social network’s dashboard tool that identifies potentially dubious posts shared across the platform.

Rappler found 12 other Facebook pages and accounts that publicly posted the same claim from September to October 2019. These posts got over 600 shares, 300 reactions, and 70 comments as of writing.

The facts: The information originally came from IA Panorama, a Russian satirical website. There is no official announcement made by the Japanese government that bans microwave ovens in Japan.

IA Panorama posted the satirical article on March 3, 2019. Titled “Japan will finally abandon microwave ovens by 2020,” the article contains the same information that was spread on Facebook. However, at the bottom of the article was a disclaimer saying: “Satirical edition ‘Panorama.’ All texts on this web resource are grotesque parodies of reality and are not real news.”

Using reverse image search, we also found that the photo used in the Russian satirical article, which was also carried by some of the Facebook posts, was a photo from Getty Images.

The claim is a rehashed one, but Philippine-based accounts and pages were sharing it again over the previous two months.

Moreover, a search of “microwave ovens” on the Japanese government’s official website yielded no mention of the supposed ban, as pointed out earlier by Agence France-Presse. This is also the case for the official website of Japan’s Ministry of Health, Labor, and Welfare.

In 2005, the World Health Organization (WHO) released an information sheet on electromagnetic fields and public health concerning microwave ovens. The organization clarified that the design of microwave ovens ensures that the microwaves are contained within the appliance.

“To dispel some misconceptions, it is important to realize that food cooked in a microwave oven does not become ‘radioactive.’ Nor does any microwave energy remain in the cavity or the food after the microwave oven is switched off. In this respect, microwaves act just like light; when the light bulb is turned off, no light remains,” WHO said. – Pauline Macaraeg/Rappler.com