Nov 21, 2019 7:37 PM PHT
Rappler.com
Facebook Twitter Copy URL
Copied
Rufa Mae Quinto's recent social media posts on Instagram and Twitter show that she was in the US with her family when the claim was made 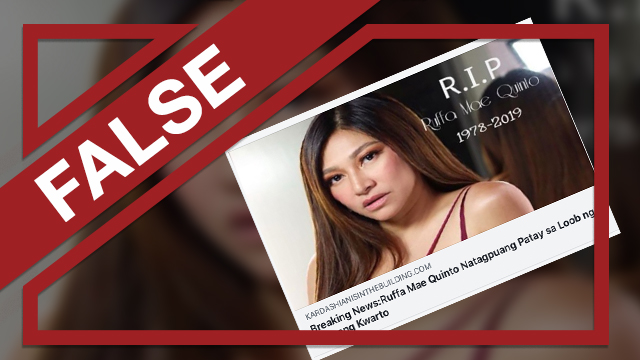 The website posted an undated video that supposedly contained news about the death of the 41-year-old actress. The 5-second video showed a still image of what looked like a crime scene where a cop was standing in front of a dead person lying on a bunk bed. 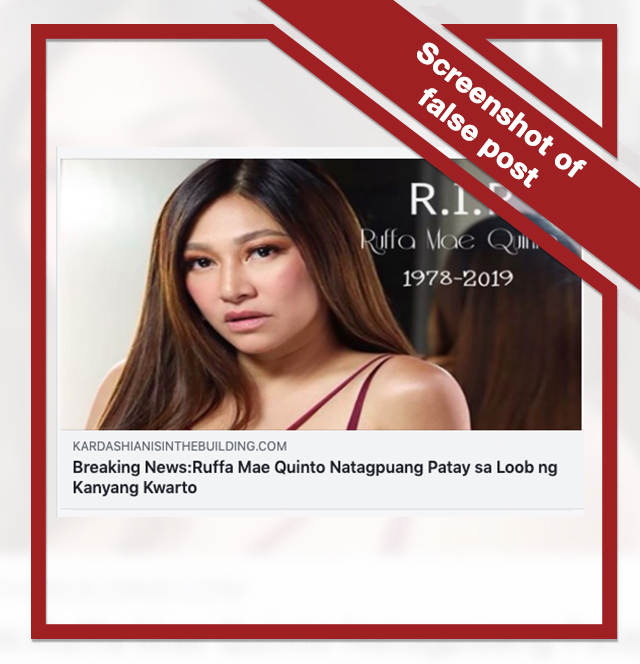 According to Facebook Claim-Check, a tool that identifies potential false claims spreading on the platform, the post was first shared on social media on November 11. The claim has been posted 6 times by the same site.

The facts: No credible media reports validate the claim about the demise of Rufa Mae Quinto. Her recent social media posts on Instagram and Twitter showed that the actress was in the United States with her family when the claim was posted.

The actual video dated October 7, 2018, was a news report from GMA News TV daily noontime newscast Balitanghali. The report said that a dead woman suspected of being a victim of a robbery-homicide was found inside her rented room in Sampaloc, Manila.

A still image extracted from the original video was used in the clickbait content. While the edited video is being played, a warning message pops up and says that the user must share it first on Facebook to watch the rest of the video. (READ: WATCH: What’s wrong with clickbait headlines?)

Records from WhoIs, a public database for domain registration details, showed that the website kardashianisinthebuilding.com was created only on October 23, 2019. The website’s homepage does not also contain contact information or the name of authors to make it a reliable site. – Glenda Marie Castro/Rappler.com