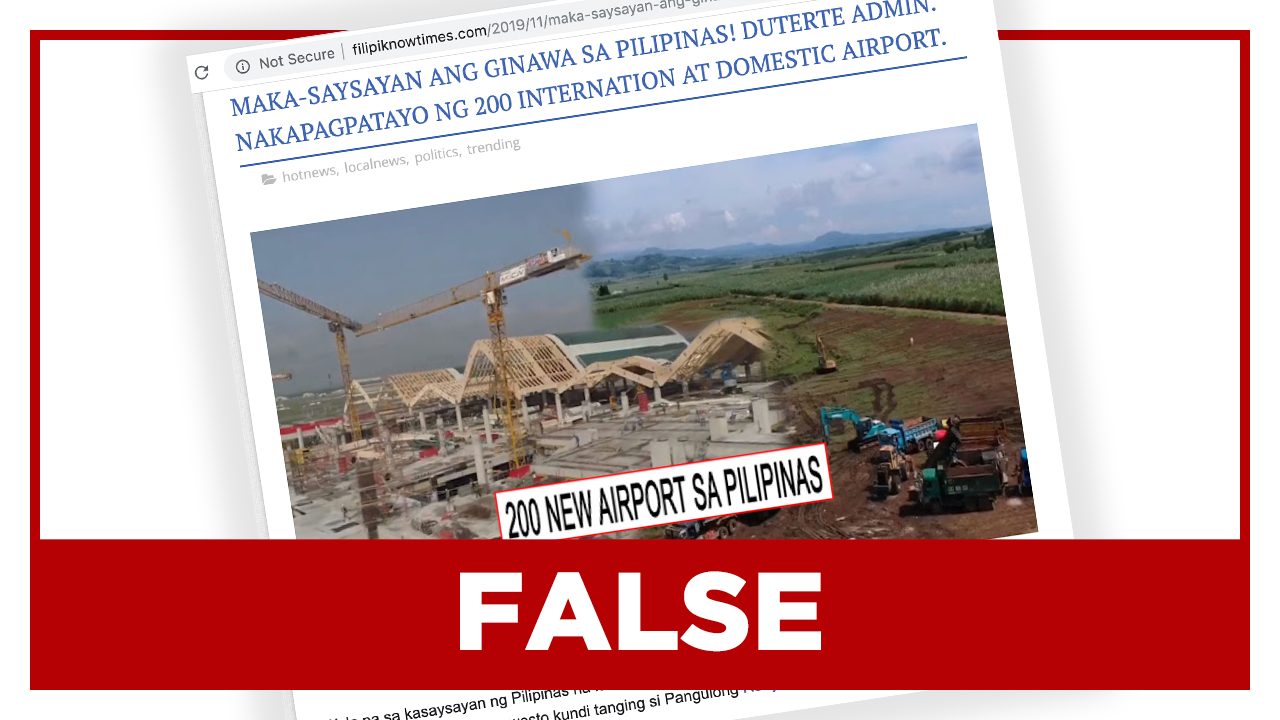 Facebook Twitter Copy URL
Copied
There are 197 'airport projects' under Build, Build, Build, but these include rehabilitation, maintenance, and upgrading projects

Claim: President Rodrigo Duterte “built 200 international and domestic airports” in the Philippines, a “historic” feat done by no other president before him, according to an article by website filipiknowtimes.com.

(And not just ordinary airports but world-class airports, some of which could rival the airports of Singapore, Hong Kong, Japan, US, and European Union [countries] in terms of size, grandeur, and cutting-edge technology.)

The article is only composed of 3 short paragraphs and a video at the bottom. The video is no longer accessible as of December 2019. The photo used in the article also said “200 new airport sa Pilipinas (in the Philippines).”

As of writing, the article had over 5,266 combined interactions from 35 Facebook groups and pages based on CrowdTangle data.

The facts: The Department of Transportation said in November 2019 that 64 airport projects have been completed under the Duterte administration’s Build, Build, Build program, while another 133 are still ongoing – bringing the total number of airport projects to 197. However, this does not only refer to construction of new airports but also includes rehabilitation, maintenance, and upgrading projects.

Meanwhile, data from the Civil Aviation Authority of the Philippines (CAAP) obtained by Rappler show a total of 157 airport projects under Build, Build, Build that are being done in 39 airports nationwide as of November 2019.

Out of those 39, only the Kabankalan Airport, Busuanga Airport, Bukidnon Airport, and New Bicol International Airport are brand-new. None of these airports have been completed as of November 2019.

An earlier version of the article included an embedded video from the Facebook page Erwin Tulfo, which posted a clip from the news show Tutok Tulfo on November 2 titled “Ang kauna-unahang paliparan na itatayo sa Bukidnon (The first airport to be built in Bukidnon).”

The news show’s report also mistook all of the airport projects for new airports.

(Since President Rodrigo Duterte took office, over 60 airports have been built while more than 100 others are still under construction and will be constructed under the Build, Build, Build program of the government. The nearly 200 new airports are expected to be opened to the public in various areas of the country before President Duterte finishes his term in 2022.)

The Facebook page took down the original post and reuploaded the video on November 23. The new post included an erratum in the caption, clarifying that they were referring to 200 “airport projects.” The video, however, remains unchanged.

There are 85 airports in the Philippines as of January 2019, according to CAAP. – Pauline Macaraeg/Rappler.com