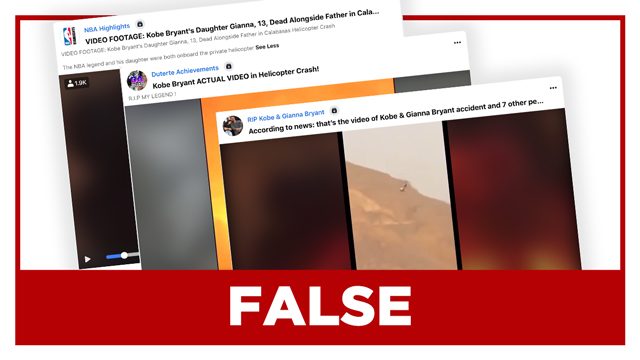 The video, taken at a mountainside, showed an aircraft spinning out of control before bursting into flames. There were also onlookers present.

Many of the pages included “RIP Kobe” and “RIP Kobe and Gianna Bryant” in their captions.

Claim Check, Facebook’s monitoring tool that identifies suspicious posts spread across the platform, flagged at least 28 pages and accounts that posted the video as of writing.

The facts: The video was from a different helicopter crash in the United Arab Emirates in December 2018.

Rappler found the same video uploaded to YouTube by user aviatrix99 on January 5, 2019. The description of the video states it was a helicopter that crashed after hitting a zipline on Jebel Jais, a mountain of the North-Western Hajar range near Ras Al Khaimah in the UAE.

On December 30, 2018, a helicopter on a rescue mission in Jebel Jais spun out of control near the world’s longest zipline. The incident left 4 people dead.

Hours after the news of Bryant’s death broke, London-based tabloid The Sun also published an article saying the helicopter crash footage that some are connecting to Bryant’s death is fake.

“The Sun Online covered the story [in Jebel Jais] when it broke, with the same footage that is being shared online as Bryant’s death, but from a slightly different angle,” the publication said.

The helicopter carrying Bryant, his 13-year-old daughter, and 7 others crashed on a hillside in Calabasas, west of Los Angeles. Los Angeles County Sheriff officials confirmed all 9 people aboard died.

International news agency Agence France-Presse released a video showing the Calabasas crash site, which looked different from the scene in the video posted by the Facebook pages. – Pauline Macaraeg/Rappler.com