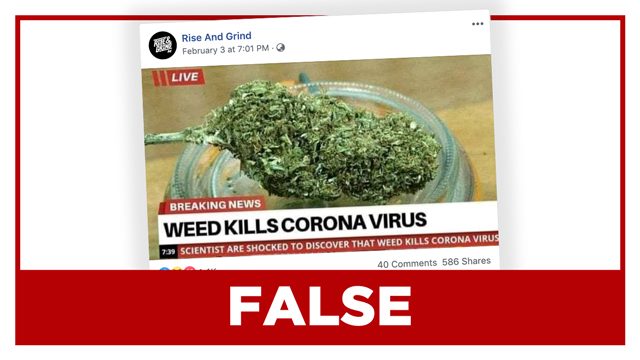 Facebook Twitter Copy URL
Copied
As of Tuesday, February 18, the World Health Organization says 'there is still no specific medicine recommended to prevent or treat the novel coronavirus'

Claim: Weed, slang for the cannabis plant, can “kill coronavirus,” according to a screenshot of what looked like a newscast shared by several Facebook pages.

The screenshot shows a photo of cannabis with the headline “BREAKING NEWS: WEED KILLS CORONAVIRUS.” It does not show the title of the program, but the screenshot has “LIVE” at the upper left corner. Below the headline, the subhead says, “Scientists are shocked to discover that weed kills coronavirus.”

Facebook Claim Check flagged at least 3 pages that posted the screenshot, which was shared from February 3 to 4. As of writing, the posts’ combined shares have reached over 12,500, and have accumulated more than 3,700 reactions and 723 comments.

The facts: As of Tuesday, February 18, the World Health Organization (WHO) said “there is still no specific medicine recommended to prevent or treat” the novel coronavirus (2019-nCoV).

China reportedly approved the first antiviral drug against 2019-nCoV on Monday, February 17, but the WHO has yet to approve it. The Philippines’ Department of Health further said the country’s Food and Drug Administration also has to approve the drug first before it can enter the Philippine market.

Using cannabis for medical purposes remains a hot topic for debate, but it is legal in Uruguay, Canada, and South Africa. There are also some states in the US that have already legalized medical marijuana as of January 2020. It is legal for medical use in 33 states and allowed in 11 states for adults over the age of 21.

The National Institute on Drug Abuse, a US federal government research institute, said the US Food and Drug Administration (FDA) “has not recognized or approved the marijuana plant as medicine,” but said there are studies showing that cannabinoids, the chemicals in the plant, may help treat illnesses and symptoms. It added that the US FDA has approved two drugs in pill form that contain cannabinoid chemicals.

However, killing coronavirus is not included in the known benefits of cannabinoids. The National Center for Complementary and Integrative Health, an agency under the US government’s National Institutes of Health, listed 13 specific health conditions that could be helped by cannabis or cannabinoids based on studies.

Meanwhile, using reverse image search, Rappler found that the photo used in the screenshot was a stock photo that has been available since June 2015.

This is not the first false “cure” that became viral on social media since the 2019-nCoV outbreak began. There were also claims saying that garlic and ginger tea can eliminate the virus, but both were proven false. – Pauline Macaraeg/Rappler.com