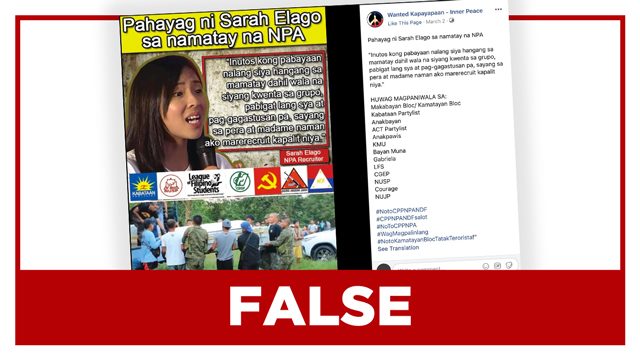 (I ordered him to be left alone until he dies because he is worthless to the group. He’s a burden and what we spend on him would be a waste of money when I can recruit a lot of people to replace him anyway.)

At the bottom of the graphic was a screenshot of a newscast from government broadcaster People’s Television Network (PTV). The headline was: “Kabataang NPA, pinabayaang mamatay ng mga kasamahan mula sa sakit (NPA youth left to die from illness by comrades).” 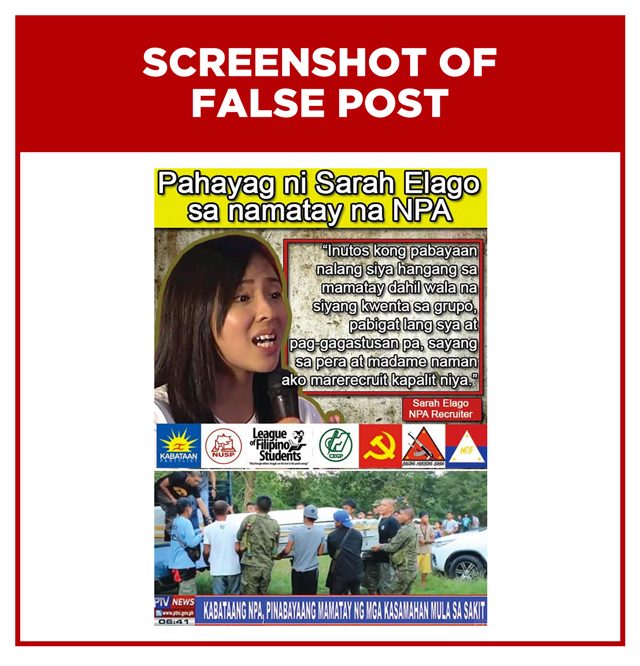 The Facebook page also labeled Elago as an “NPA recruiter.” It posted the graphic on March 2 and has since accumulated 391 shares, 106 reactions, and 26 comments. Facebook’s monitoring tool, Claim Check, flagged the post for fact checkers to verify.

The facts: The statement in Wanted Kapayapaan – Inner Peace’s graphic did not come from Elago. The PTV screenshot at the bottom of the graphic is true and still exists on PTV’s official YouTube channel as of March 2020, but Elago was not mentioned in that report.

PTV’s report said that an NPA member named Bertoldo Cabatchete Jr died from pneumonia. His body was transported from Luzon to Agusan del Norte, where his family lives. The video of the news clip was dated January 3, 2020 on YouTube.

(They took my son, and they didn’t even help him when he became sick. They should have brought him to the hospital especially because he was sickly. They just left him alone.)

Rappler also reached out to Wanted Kapayapaan – Inner Peace to ask for the source of their post, but we only received an automated response that did not answer the question.

(The people behind the propagation of these fake statements are desperate. They do this to justify the pressure, silencing, and other attacks on the free and critical voice of the youth.)

This is not the first time Elago was targeted by posts that attribute false statements to her. In August 2019, she was falsely quoted as saying that parents of student activists are “cowards and are lapdogs of Duterte.” In November 2019, another post wrongly quoted her as saying that the “youth have no future with Duterte.” – Pauline Macaraeg/Rappler.com