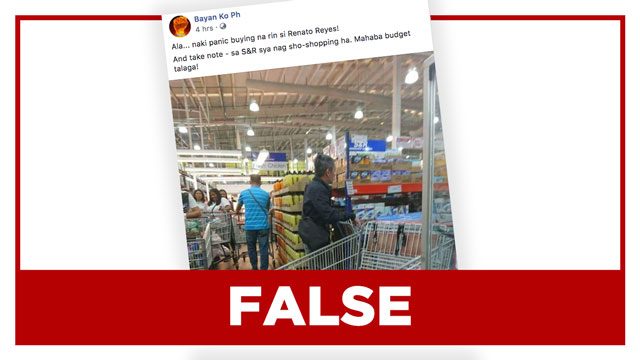 (Oh my… Renato Reyes also engaged in panic buying! And take note – he shopped at S&R. He truly has a big budget!) The post was flagged by Facebook Claim Check, a tool that detects posts with potentially false information. According to Claim Check, it had acquired around 153,500 views as of posting.

Using social media tool CrowdTangle, Rappler found that at least 19 other Facebook groups and pages reposted the claim on the same date. These pages and groups were mostly pro-Duterte and pro-Marcos.

The facts: Reyes dismissed the claim as false, saying the photo was taken two years ago.

Reyes responded to the false claim that the photo was recent, saying: “For those who are being misled, these are the same pictures taken two years ago, and only made to appear as recent. This is the handiwork of trolls who wish to divert attention from the problematic government response to the COVID 19 crisis.”

He added that they will not hesitate to take legal action against those who spread lies and disinformation to attack them.

The page Bayan Ko Ph had also been fact-checked by Rappler in the past for posting false claims.

As of posting, there have been 140 confirmed coronavirus cases and 11 deaths in the country. President Rodrigo Duterte has placed Metro Manila under lockdown or “community quarantine.” (READ: What we know so far: The Metro Manila coronavirus lockdown)

Amid the continuing outbreak, the Department of Trade and Industry warned those suspected of overpricing and hoarding medical devices and products could be charged for profiteering. (READ: Self-quarantine guide amid coronavirus pandemic: When to do it, what to stock up on) – Loreben Tuquero/Rappler.com