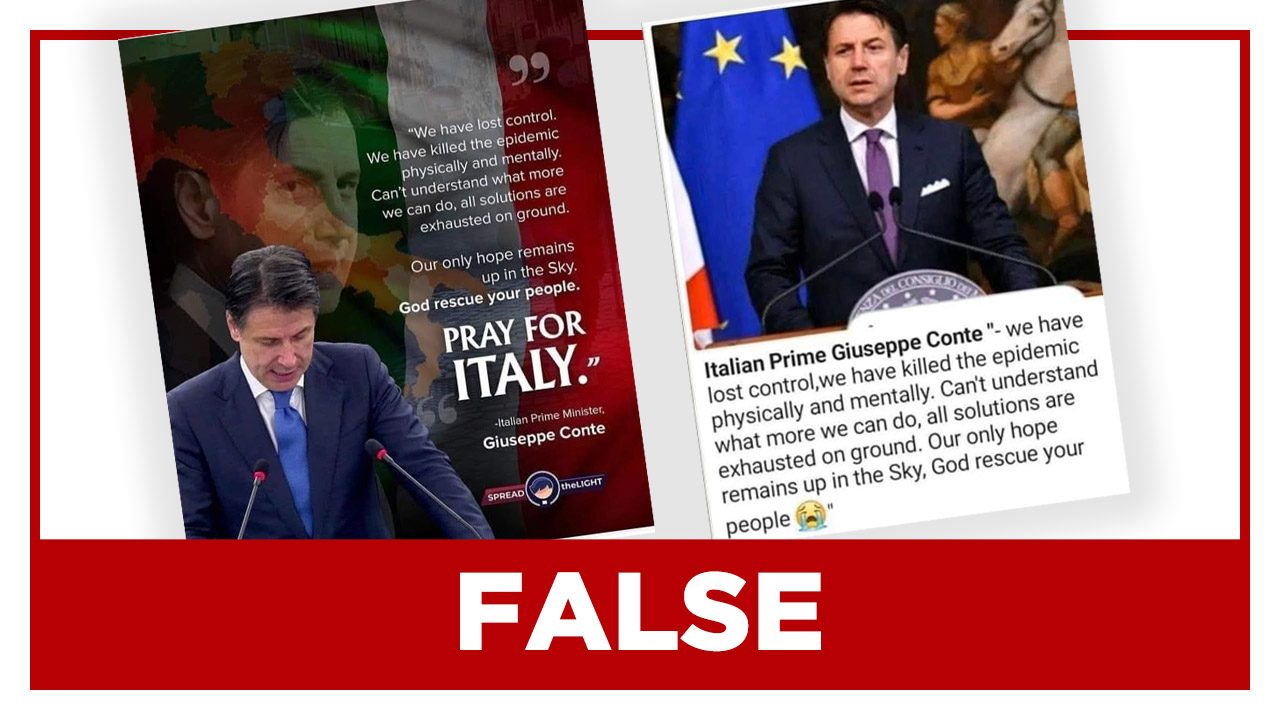 Claim: Italian Prime Minister Giuseppe Conte was quoted in various posts and graphics on Facebook as saying they have “lost control” of the coronavirus pandemic that is greatly affecting Italy.

“We have lost control, we have killed the epidemic physically and mentally. Can’t understand what more we can do, all solutions are exhausted on ground. Our only hope remains up in the sky, God rescue your people,” Conte supposedly said.

This claim has appeared in various forms on Facebook as early as March 23, from text posts to screenshots of the quote with a picture of Conte, to a graphic containing the quote.

Facebook’s Claim Check dashboard flagged these posts for verification. It said that these posts have been shared thousands of times. A reader also emailed to Rappler a link to a post with such claim. The facts: No official statements or reports from credible news organizations carry this supposed quote by Conte. The graphics and screenshots also did not point to the source of the quote.

In addition, this quote is contrary to recent statements by Conte on the country’s coronavirus response on March 16 and March 21 (translated from Italian to English through a translator app). These statements are published on the website of the Italian government’s Presidency of the Council of Ministers.

“We are giving up the most expensive habits, we do it because we love Italy, but we do not give up courage and hope in the future. United we will do it,” Conte said on March 21.

Other fact-checking groups like Full Fact and Check Your Fact also said the quote on the claim is not real.

Rappler had earlier fact-checked a coronavirus-related claim about Italy. A graphic or screenshot had spread about the “crying president of Italy” but the world leader in those claims was actually Brazilian President Jair Bolsonaro.

As of March 25, over 7,500 people have died in Italy due to COVID-19, the disease caused by the coronavirus, which has also infected over 75,000 there. Italy is currently under a nationwide lockdown to try to contain the spread of the disease. – Michael Bueza/Rappler.com