FALSE: Panelo quote lashing out at the poor 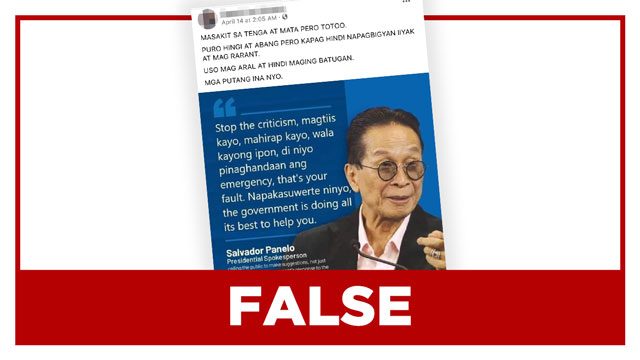 Facebook Twitter Copy URL
Copied
Panelo did not say what was attributed to him in the graphic, which was manipulated from a quote card posted by Inquirer.net

Claim: Former presidential spokesperson Salvador Panelo blamed the poor for not saving up in the middle of the coronavirus crisis.

(Stop the criticism, bear it, you are poor, you have no savings, you did not prepare for this emergency, that’s your fault. You are so lucky, the government is doing all its best to help you.) The graphic was dated April 8, with a description saying Panelo called on the public to offer suggestions for, not just criticisms of, the government’s response to the coronavirus crisis.

A reader sent the claim to Rappler for verification. The claim was also flagged by Facebook Claim Check, a tool that detects posts with potentially false information.

The facts: Panelo did not say what was attributed to him in the graphic, which was manipulated from a quote card posted by Inquirer.net.

In Panelo’s virtual presser on April 8, he addressed criticisms against President Rodrigo Duterte’s statement that he warned the country about the coronavirus threat “at the start,” a claim that Rappler also previously debunked.

(Hopefully at this time of our crisis, let’s tone down our criticism of the government. It’s all in the past and is already being handled. Maybe it’ll be better if we give suggestions instead. Whatever failure we see, let’s forward it immediately.)

On April 9, Inquirer.net posted that they did not produce an image with another variation of the false quote: “Kayong mahihirap, wala kayong karapatan magreklamo, wala naman kayong ambag sa gobyerno puro lang naman kayo umaasa sa tulong ng gobyerno. Pasalamat nga kayo at nabigyan pa kayo ng amelioration benefits at relief items galing sa gobyerno. If not for the wisdom and kindness of the Duterte administration, most of you should have been buried in the face of the earth.”